Disaster in the Gulf of Mexico – What went wrong?

Since April 11, 2010, when the Deepwater Horizon oil rig exploded, killing 11 people, the world has been wat...

May 10, 2010
by Canadian Consulting Engineer 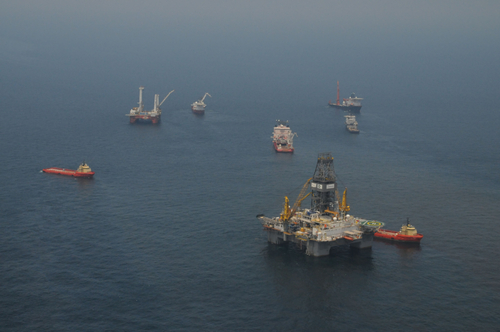 Since April 11, 2010, when the Deepwater Horizon oil rig exploded, killing 11 people, the world has been watching this environmental disaster unfold. The rig which is owned by Transocean and is leased and operated by British Petroleum (BP), has been dumping 200,000 gallons of oil per day into the ocean.
Crews have been attempting to drill a relief well that will reduce pressure in the main well. It is hoped this will enable crews to cap the main well. The latest efforts to insert a concrete dome over the existing hole have failed.
The Mineral Management Service (MMS) is the U.S. federal agency responsible for regulating offshore drilling licenses and ensuring that companies have emergency measures in place in the event of a blowout.
MMS was not available Saturday or Sunday to comment on the plan BP filed with the agency regarding contingency plans or the regulation of redundancy in blowout preventers. But according to media reports, in February 2009, BP’s exploration and environmental impact plan filed with MMS stated it was “unlikely that an accidental surface or subsurface oil spill would occur from the proposed activities.” While Norway and Brazil require a remote-control or acoustically-activated blowout preventer switch on all offshore rigs, MMS questioned the $500,000 cost of the device, citing that the rig had other back-up systems to cut off a well.
MMS has postponed its 2010 Offshore Industry Safety Awards.
The families of two missing workers have filed lawsuits against BP and Transocean citing negligence and failure to meet federal regulations.
I asked D. Joseph (Joe) Touhill, Ph.D., P.E., a member of the American Academy of Environmental Engineers, whether the spill damage can be reversed. “Yes, but only after a lot of work,” Touhill said. “Exxon Valdez is a good case study in this. If you go back to Alaska to where the spill occurred it has largely recovered…Over time the environment will recover.”
To prevent this kind of disaster in the future there needs to be “an examination of how this happened,” Touhill said. He believes the industry needs to “come up with the scenarios of what caused this. [We] need redundancy in blowout preventers…. [We] have to have as much redundancy as required to make sure the blowout preventers work.”
According to newspaper reports, Robert Bea, a University of Berkeley engineering professor who served as a risk assessment consultant for BP, has developed what he believes is a mode of failure for the oil rig:
– Workers set and tested a seal at the bottom of the well.
– They reduced pressure in the drill column and attempted to set a second seal below the sea floor.
– An exothermic chemical reaction from the setting concrete created heat.
– The heat converted a pocket of methane crystals into a bubble of compressed gas
– The gas expanded as it rose up the column.
– Gas entered an adjoining room.
– Exposed ignition sources in the room ignited the gas.
Drilling in deep waters presents greater challenges than in shallower waters. Touhill explains: “When you get farther out into the ocean with platforms that are very deep and you are drilling deeply it’s not as easy to take care of. It’s not as easy as if you were in Santa Barbara in 190 feet of water and a few miles off shore. You’re taking a tough situation and making it very difficult by taking it out into the water and drilling down tens of thousands of feet.”
Part of the challenge in developing emergency procedures is that oil rig disasters are infrequent. “They don’t happen frequently so we see a reinvention of the wheel every time they do happen,” says Touhill. “We don’t have a chance to hone our skills to take care of them.
The good news is that they don’t happen very often. The bad news is that because they don’t happen very often, the repairs are being done ad hoc.”

Are rigs near Canada safe?
Closer to home, the Canadian government is examining offshore drilling near Newfoundland. On Sunday, Chevron Canada started to drill the deepest oil well ever drilled in Canadian waters. The Lona O-55 well is being drilled 430 kilometres northeast of St. John’s, Newfoundland and will be 2.5 kilometres deep. The Deepwater Horizon well in the Gulf of Mexico was tapping oil in an underground reservoir more than 5 kilometres deep (3.9 kilometres below the ocean floor).
Prior to being granted a drill license, Chevron had to demonstrate how it would drill a relief well. At  present, it is not clear how fast a relief well could be drilled in the event of an accident.

Paul H. Boge, P. Eng. is an engineer with Boge & Boge in Winnipeg. He is also a writer and filmmaker. Filed with information from the Globe and Mail, Daily Telegraph (UK) and Wikipedia.