The Canada Green Building Council (CaGBC) has announced that Canada now has over 100 LEED v4 registrations, representing over 681,000 square-metres of building floor area.

According to CaGBC, in addition to energy and carbon reductions, owners are choosing LEED for its holistic approach to green building that includes water efficiency targets, thresholds that promote wellbeing in interior spaces, and a focus on materials and waste.

In addition, LEED is prioritizing access to alternative modes of transportation and protection of the natural habitat, along with increasing the resilience of buildings to withstand more frequent extreme weather events. 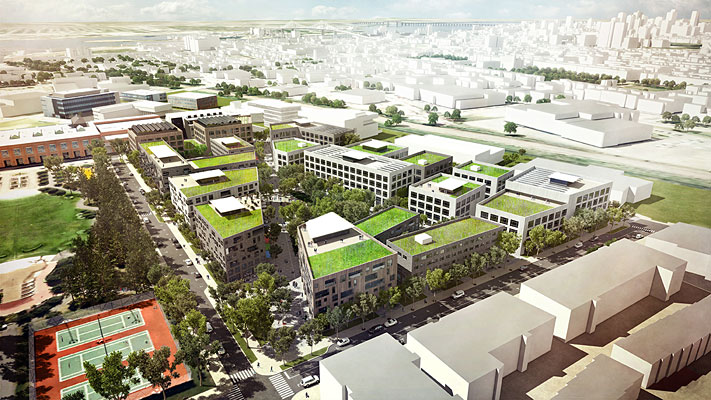 The Council highlights the project Technopôle Angus, which is registered and targeting LEED v4 Platinum certification.

As a neighbourhood development project located in the heart of Montreal, developer Société de développement Angus deployed LEED v4 to simplify and streamline the design process in order to turn what was once a contaminated industrial park into a walkable, car-free, and diverse neighborhood.

The project plan proposes a densely built environment with an affordable residential component and an public space designed to deliver an ecologically autonomous, greened and integrated infrastructure.

Green corridors were integrated into the project plan to alleviate rainwater management, but will also mitigate the displacement of biodiversity on the site and act as a catalyst for change in the city.

“Canada is currently undergoing a massive shift as we move toward a low-carbon economy with governments and industry alike recognizing that the time to act is now, and, as the most widely used rating system, LEED is taking on a prominent role in scaling up that transition,” says Thomas Mueller, president and CEO of the Canada Green Building Council, in a media release.

“While it’s absolutely critical to address carbon as a key building performance metric, LEED v4 also provides a holistic approach to design, operations and maintenance. For example, green buildings need to balance increasing energy efficiency standards with a healthy building design that provides fresh air, access to daylight and views along with non-toxic and comfortable environments for building occupants.”

The cumulative impact of LEED certifications in Canada since 2005:

To date, governments lead the way with 28 LEED v4 registrations (10 provincial and 18 municipal).

There are also a diverse mix of building types represented, with office buildings, residential projects, and schools.

These LEED v4 registrations join a cumulative total as of June 30, 2017, of 7,088 LEED certified and registered projects in Canada.