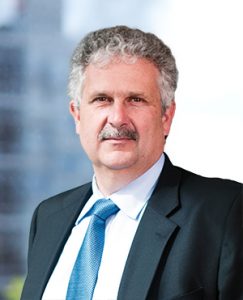 WSP Global, based in Montreal, has busy month in June.

It appointed Hugo Blasutta as a new president and chief executive officer for WSP Canada.

Blasutta was formerly the chief executive officer for MMM Group, a Toronto-based company which WSP acquired last year. Blasutta helped MMM grow into one of Canada’s largest privately owned engineering consulting companies, known for its work in planning and infrastructure design, transportation and sustainability. A civil engineering graduate and post-graduate from the University of Toronto, he has more than 35 years global experience in engineering.

Also in June, WSP, which now has 8,000 employees in 150 offices across Canada, opened  a new office in Hamilton, Ontario, “Canada’s steel city.” Hamilton Mayor Fred Eisenberger and MP Bob Bratina were on held to unveil the new 8,500-sq.ft. facilities on June 23. The new premises are home to 40 WSP employees who previously worked in Ancaster and Burlington. David MacGillivray, practice lead for environment with WSP Canada, said “We see Hamilton and Golden Horseshoe region as a huge target for growth and are excited to be part of this innovative business community.”

Over in the U.K. WSP Global was also recently in the news for reversing its decision to acquire a London-based company known as Sweett. On May 25 WSP said it had reached an agreement to acquire the entire shares of Sweett, which employs 600 people, mainly in the U.K. Then on June 30, WSP issued a statement saying it had terminated its efforts to acquire the company and would not increase its offer price. Sweett specializes in quantity surveying, project management, building surveying and other special services.

In the same month, WSP Global entered an agreement with a U.S. based company, Schlumberger, to acquire its industrial water consultancy business. On June 17 WSP said the acquisition of the 250-employee business “will enable WSP to provide water consulting services and project solutions to industrial clients worldwide and will establish a presence for WSP in Chile and Peru. The acquisition will also add to our presence in a number of countries in which we currently operate, including the United States, the United Kingdom, Colombia and Mexico.” This transaction is expected to close in the third quarter of 2016.