People are starting to move into the massive redevelopment around the old Woodward's department store in Vancouver'...

May 1, 2009
by Canadian Consulting Engineer 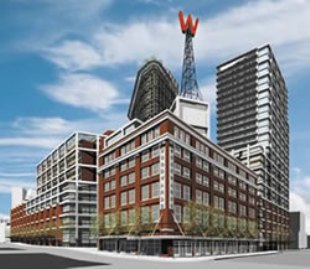 People are starting to move into the massive redevelopment around the old Woodward’s department store in Vancouver’s Downtown Eastside. The 1903 store has been reconstructed as a heritage building on one corner of the 1-million square foot development, topped with its reconstructed tower and landmark “W” sign.

The entire complex covers an area between West Hastings Street and Cordova Streets, east of Abbott Street. The site includes two residential towers of 19 and 40 storeys, and a lower building along West Hastings that will house facilities for the SFU School of Contemporary Arts and Vancouver Community College. A 350-seat theatre, daycare centre, retail and community facilities are all incorporated into the massive complex, which is split diagonally by a large open public square and atrium.

The residential components have both market and non-profit units, with the idea that the mixture will help to lift the surrounding area out of its current status as one of the worst in Canada as a home to poverty, prostitution and drug-use. The strategy seems to be off to a good start, with the entire stock of 536  market condominium units already sold, although the project has not been without controversy.

Henriquez Partners are the architects. Glotman Simpson is the structural engineer, Stantec Consulting is mechanical engineer, and Nemetz (S-A) is the electrical engineer. the developer is Westbank Projects/Peterson Investment Group.

Most of the original 1903 wood frame store was demolished in 2006, but fragments and original beams are being incorporated in the structure. The W-sign  stands on a replica of the Eiffel Tower, 270 feet high.

The official opening of the complex is set for this October.