In Memoriam. Dr. Ursula Franklin was an inspirational female leader in Canadian science, but she also asked the questions we seldom ask about technology, and where it is leading us. 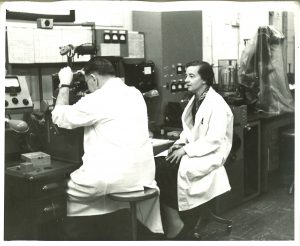 “University Professor Ursula Franklin made remarkable contributions to the U of T Engineering community, the engineering profession and the world.  … I know that her extraordinary legacy will continue to inspire future generations of engineers.” Cristina Amon, dean of the Faculty of Applied Science & Engineering, University of Toronto.

Technology comes at us at warp speed ringing, pinging, rushing, leaving most of us without a moment to think about the impact of the changes constantly bombarding us. Dr. Ursula Franklin asked the questions we seldom ask. Where is all this technology taking us? What does it give and what does it take away? How does it affect the society we live in? She asked questions not only about technology  but about fairness, justice, the environment, peace. She not only thought but acted.  And she gave those of us privileged to meet her much to think about.  Ursula Franklin was one of the rare insightful minds thinking about the things we often don’t think about. About how the real world really works.

Dr. Ursula Franklin joined the Department of Metallurgy and Materials Science of the University of Toronto’s (U of T) Faculty of Engineering as a researcher and associate professor in 1967. She was professor of metallurgy, research physicist, the first woman to be named full professor at U of T, fellow of Massey College, winner of numerous awards and staunch supporter of women in science and engineering. Dr. Franklin died on July 22, 2016 at the age of 94. 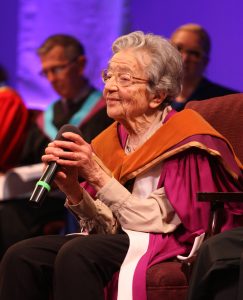 Dr. Franklin arrived in Canada in 1949 to take up a postdoctoral fellowship at U of T and spent the next 15 years at the Ontario Research Foundation. She had survived the Holocaust in her native Germany and had obtained a Ph.D. from the Technical University of Berlin. She married fellow engineer and fellow Quaker, Fred Franklin, in 1952. Their two children survive them.

One of Dr. Franklin’s most important contributions grew from her keen interest in the affect of technology on people. This was visible in her earliest work. In the 1960s she was one of a group of scientists monitoring the levels of the radioactive isotope strontium 90 in babies’ teeth. The findings eventually helped stop atmospheric weapons testing.

Later in her important book, The Real World of Technology and in other writings, Dr. Franklin explored the role of technology in society — how technologies influence the structure of societies and influence the kinds of technologies they produce. How the technology changes us, organizes us and sometimes even threatens us. To her technology was not just a set of gadgets or machines, but rather  “organization, procedures, symbols, new words, equations and most of all mindset.” She divided tasks into holistic and prescriptive technologies. The former, where the producer is in charge of the whole process as were craftspeople, is probably lost to most of us now. The prescriptive technologies where processes are divided into bits with groups of practitioners each doing one part of the process is the norm now. These technologies need managers to organize the parts and compliance from the people doing the tasks. In other words, they result in greater control of one group over the other.

She could challenge and encourage.  With her vast knowledge she could sharply challenge industry executives trying to argue their way out of environmental regulations. She would also mentor and encourage young people trying to find their way. Her spirit lives on for the many engineers who passed through her life, the many women who benefited from her example, the many people who struggle for peace and justice, and especially for the young people attending the Ursula Franklin Academy in Toronto. Ursula Franklin’s keen analytical mind which helped us understand the real world of technology is now at rest but her brilliance and humanity lives on.