Three large firms shared the top Willis Chipman Award — all for projects that are located around Union Station in the heart of Toronto’s downtown.

AECOM was given the award for its Union Station and Front Street Revitalization project. The company did project management, detail design and construction for the Toronto Transit Commission on its Union subway station second platform and concourse Improvements. At the same time the firm was retained by the City of Toronto to redesign adjacent Front Street as a major new public space, providing improved pedestrian circulation, bicycle lanes and wider sidewalks.

Hatch won for its design of the Northwest PATH Pedestrian Tunnel. It takes pedestrians from the west side of Union Station, crosses below Front Street at York Street and connects to the extensive pedestrian concourse network below the banking towers of the core.

CH2M Hill was recognized for its project management of the Union Pearson Express project, a new direct rail link to Pearson International Airport from Union Station.  The engineers were in charge of project management for Metrolinx, helping to ensure that the $465 million undertaking was completed on budget and was ready to open before June 2015

Barry Steinberg, chief executive officer of Consulting Engineers of Ontario spoke about the three big winners: “While each project is the epitome of outstanding engineering endeavours, together they represent a multimodal transportation hub that moves people across the Greater Toronto Area and beyond. The projects of AECOM, CH2M Hill and HMM have collectively contributed to transforming Union Station into the state-of-art transportation gateway for Ontarians.” 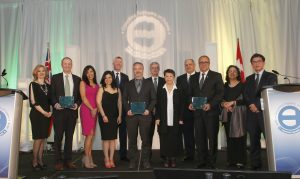 Winners of 2016 Willis Chipman Award at the 2016 Ontario Consulting Engineering Awards. Present are people from AECOM, Hatch and CH2M.

The jury of five independent jurors selected five projects to win awards of excellence. These awards are categorized according to company size. They went to Associated Engineering, IBI Group, JADE Plus, Morrison Hershfield and Robinson Consultants.

Among firms with 1-25 employees, JADE Plus won for the Hazelton Lanes-Monorail & Gantry Track in Toronto. When a crane could not be used to lift new chiller units into the mechanical penthouse area of the shopping complex, JADE developed a temporary system of 12 ton double monorails and gantry tracks that were retrofitted into the mall. The challenge was that the vertical clearances were very tight and the units were required to be lifted from the bottom. The design enabled all 11 units to be installed in one day.

Among firms with 26-50 employees, Robinson Consultants won for the Hiawatha Park Road Culvert Replacement in Ottawa-Gatineau. A new 1200-m diameter culvert was installed under the road using the jack and bore trenchless method due to the presence of an interprovincial, 500-mm diameter vital gas main which services thousands of residents in Ottawa and Gatineau.

Among firms with 51-100 employees, Associated Engineering won for the Re-Coating, Structural Rehabilitation and Electrical Retrofit of West Main Street Bridge. The bridge is an 85-year old

Among firms with 100-350 employees IBI Group won for the 2015 Pan Am/Parapan Am Games Transportation Delivery Plan. Working for the Ministry of Transportation Ontario, IBI Group undertook the planning and delivery of all aspects of the Games’ transportation for both athletes and spectators. The plan covered all transportation modes and involved 30+ municipalities and transit agencies, involved security, spectator parking, and trip planning. The route network was 1,500 kilometres.

Among firms with more than 350 employees, Morrison Hershfield won for the Robinson Place Ontario Government Building. This 21,368-square metre building in Peterborough is the first government building to achieve LEED EBOM Platinum in Canada. Its upgrades obtained an ENERGY STAR score of 89.

The award winners were selected by a panel of five independent judges who have distinguished backgrounds in different fields of the industry.

The Ontario Consulting Engineering Awards were launched 13 years ago and have become the province’s most prestigious awards program.

For more details and photographs, visit the CEO website, here.