Ryerson University, University of Waterloo and the University of Toronto announce promising technologies for treating oilsands wastewater, for developing non-toxic batteries, and a way to efficiently convert C02 into energy. 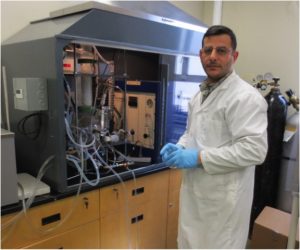 Necessity breeds innovation and Canadian universities have been busy finding potential solutions to the world’s environmental problems. At the end of August the University of Toronto, the University of Waterloo, and Ryerson University in Toronto, all announced breakthroughs.

Al jibouri’s new process not only removes all non-biodegradable pollutants and its toxicity, but does so in less than three minutes. After the treatment  the industrial waste water can be treated in a way similar to municipal wastewater. At the same time, the ozone gas consumption required to treat the wastewater is reduced to its minimum, reducing those costs. Al jibouri estimates his process saves roughly 35-80% in operating costs compared to other traditional advanced oxidation waste water treatment approaches.

The University of Waterloo announced that Professor Linda Nazar and colleagues from the Faculty of Science have developed a long-lasting zinc-ion batter that costs half the price of current lithium-ion batteries. They believe that the new battery could help communities move more easily into renewable power sources such as wind and solar.

The battery uses non-flammable, non-toxic materials and a pH-neutral water based salt. It consists of a water based electrolyte, a pillared vanadium oxide positive electrode and an inexpensive metallic zinc negative electrode. It generates electricity through a reversible process called intercalation.

To see the University of Waterloo press release, click here.

Excessive carbon dioxide emissions are seen as an environmental plague with the world currently emitting about 30 billion tonnes annually.  But scientists at the University of Toronto have found a way to convert the emissions into fuel though the use of silicon. The idea of converting CO₂ emissions to energy is not new.  For decades there has been a global race to find a material that can efficiently convert sunlight, carbon dioxide and water or hydrogen to fuel.  However, it has been difficult to find a practical solution.

Now chemistry professor Geoffrey Ozin and his team have found that silicon nanocrystals meet all the criteria for such a conversion. The hydride-terminated silicon nanocrystals — nanostructured hydrides for short — can efficiently harvest the near-infrared, visible and ultraviolet wavelengths of light from the sun together with a powerful chemical-reducing agent on their surface to convert gaseous carbon dioxide to gaseous carbon monoxide. The potential result is energy without harmful emissions.

Ozin is the Canada Research Chair in Materials Chemistry and lead of U of T’s Solar Fuels Research Cluster. They are now seeking ways to increase the activity, enhance the scale, and boost the rate of production of the technology. Their goal is a laboratory demonstration unit and, if successful, a pilot solar refinery.

To read the U of T press release, click here.