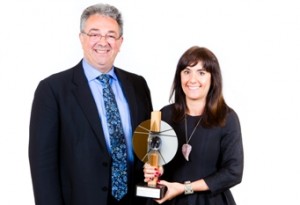 Réal Laporte, président of Hydro-Québec Équipement presenting an AFG/Leonard award to Maria Mingallón of Arup Canada for the ContemPLAY pavilion.

The newly named Association of Consulting Engineering Firms – Quebec/Association des firmes de génie-conseil – Québec (AFG) announced the winners of its annual awards on May 12.
Held at the Grande Bibliothèque in downtown Montreal with 300 people present, the awards were presented by the association, which is still officially called AICQ, under the theme: “Change the World.”
Among the honoured guests were Martin Coiteux, Quebec’s Minister responsible for Government and Chair of the Treasury Board, and Christian Dubé, first vice-president of the Caisse de dépôt et placement du Québec. 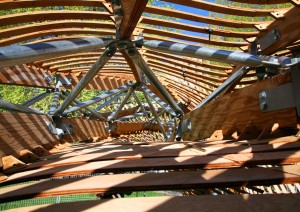 Chairman of the Board, Claude Décary, noted that the awards show that the expertise of consulting engineering firms and their strategic role are major forces in the socio-economic development of Quebec.
Called the “Leonards,” the awards were given in 10 categories.
– The “visionary award” went to Maria Mingallón, P.Eng. of Arup Canada for her leadership in the design and construction of ContemPLAY. This is an urban pavilion developed by the research laboratory FARMM (Facility for Architectural Research in Media and Mediation) from McGill University. Its complex structural forms were made using parametric design, advanced calculations and digital manufacturing techniques.
For engineering projects, awards went to:
– Bouthillette Parizeau for the Stinson transportation centre in Saint-Laurent for the Montreal Transit Corporation (STM). The 38,400 sq.m industrial building is certfied LEED Gold buildings/mechanical-electrical category).
– CIMA+ for the Westmount Recreation Centre. The project, built by Pomerleau for the City of Westmount, devoted 40% of the total budget to the structure. Among the challenges was the creation of an underground park and outdoor pool (buildings/structure category).
– Stantec for the Health and Social Services Centre (CSSS) on Point-de-l’Ile. A renovation of a building that has 600 residents, the project achieved energy savings by adding geothermal technology, low temperature heating systems, heat recovery and condensing boilers (energy category).
– Golder Associates for “Co-Composting of Soils affected by PAHs and Heavy Petroleum Hydrocarbons,” a project in east Montreal for Dow Chemical and Pétromont. The large-scale treatment process means the soil can be reused as fill material for the future development of the site (environment category).
– Stantec and the Cree Nation of Mistissini for the construction of a wooden bridge with a length of 160 metres. The series of semi-continuous arches shows that attractive structures can be made while respecting the budget and the environment (transportation category).
– WSP for the Quartier des spectacles. This urban design project led by WSP with the City of Montreal creates a cultural space above and below-ground in a complex environment. The result affirms Montreal as a UNESCO City of Design (urban infrastructure category).
– An award of “mentor of the year” was given to Roger Lagacé, P.Eng. of Bouthillette Parizeau for his involvement with young engineers.
– In the “small and medium-sized firm” category Infrastructel won for developing a new 360-degree photographic method for manhole inspections that has been adopted by the Commission of electrical services in Montreal. This photographic inspection methodology provides information that is high quality, easy to read and store, and in a much shorter time.
– Young professional Olivier Melhem, ing. of Bouthillette Parizeau won the “emerging consulting engineering professional” award. It was given for his role in the design of very large medical gas systems and pneumatic transportation for the McGill University Health Centre (MUHC) – Glen Site, a project by SNC-Lavalin. The award goes to someone with fewer than five years’ experience in executing a project.
The chair of the jury was Alain Dubuc, columnist at La Presse. The evaluation criteria included the role of the consulting engineer, the impact on the profession, how human resources were managed, and the integration of sustainable development principles.
To see photos of the winners receiving their awards and their projects, click here.
To read an article about AICQ changing its name to AFG, click here.