Engineering association wants engineers to be leaders again, and says they should be brought to the table early when important decisions are made, such as over carbon trading and infrastructure. 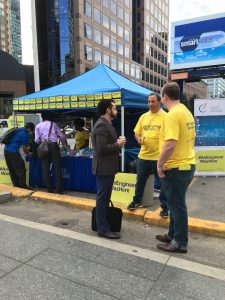 OSPE meets and greets on the corner of Bloor and Church Streets in downtown Toronto, September 20.

If there’s a common notion of the engineer as a quiet person who sits behind a desk, that image was broken on Tuesday, September 20 — at least in Toronto.

For most of that day staff from the Ontario Society of Professional Engineers (OSPE) handed out printed tags, coffee, and doughnuts at one of the city’s busiest intersections, Bloor and Church Streets, as part of a “day of activation.”

With its #AnEngineerWasHere campaign, OSPE is enlisting the help of the public and engineers to broadcast the news that engineers are responsible for designing most of the objects we encounter and interact with in our daily lives. To get the message out, OSPE has designed a yellow tag featuring the campaign hashtag, #AnEngineerWasHere, and is asking people to photograph the tag against an object or structure designed by an engineer, and then

The purpose of the campaign, says OSPE — a voluntary organization that advocates for engineers —  is to remind Ontarians, “engineers make the world work: where and how you live, travel, learn and experience the world is made possible by the expertise of engineers. From soaring towers and city grids to cars, phones and computers, the work of engineers impacts almost every part of daily life.

“The world needs engineers. But in our rapidly changing world, the role of the engineer is constantly evolving and often overlooked.”

OSPE’s partners, including the Toronto Rehab Institute, Metrolinx, Siemens Canada and the CN Tower, are helping out by sharing “#AnEngineerWasHere” with tagged photos of buildings, public transit vehicles, stations, rail lines, streets and bridges. The Toronto Transit Commission is promoting the hashtag on its subway screens and will direct people to www.anengineerwashere.ca

Sandro Perruzza, OSPE’s chief executive officer, and Jonathan Hack, P.Eng., vice chair of OSPE, were on the street speaking with the public and handing out the tags on September 20.

Perruzza points out that engineers are involved in far more than physical infrastructure and objects. For example, they work in healthcare applications, and even in the financial arena, where they analyze and identify patterns that help investors and fund managers make sound investment decisions regarding portfolios containing new technologies.

OSPE wants to remind governments especially that engineers must be at the table when important decisions are made.  Too often engineers are left out.  “For example,” says OSPE, “the government is establishing a complex Climate Change Action Plan that involves a unique cap-and-trade program, incentive structures for electric cars, green transit infrastructure, and other engineering-focused projects — largely without input from Ontario’s engineers.”

If engineers have been reluctant to come forward and have not demanded a seat at the table, that’s changing. Perruzza says a new generation believes “engineers need to take the lead again” as they did during the early 1900s “when many of the captains of industry were engineers.”