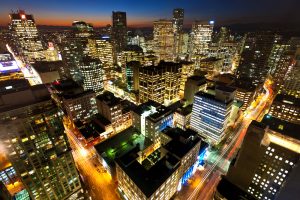 The Province newspaper in B.C. published a lengthy investigative article on October 20 about the risks to older buildings in Vancouver should there be a major earthquake.

Entitled “B.C. Earthquake threatens Vancouver buildings,” the article by Gordon Hoekstra says that despite a staff recommendation in 2013 that the city should establish a technical committee to advise on reducing the risks to this building stock, the city has still not done so three years later. While the city has spent $100 million in upgrading water and transportation infrastructure to make it safe in case of the “Big One,” it seems to have overlooked the seismic safety of older buildings.

An earthquake preparedness update by city staff in 2013 showed a cluster of large buildings dating from before seismic standards were introduced into the building code in 1973. The buildings were in the downtown, West End, east side, along Kingsway and Broadway, and in the industrial and commercial areas along the Fraser River. One example given was the West Hotel on Carrall Street, a 100-year old eight storey brick establishment that houses 80 people in low-rent  single rooms.

The Post Media reporters (Post Media owns The Province) also dug out previous reports. One was an engineering report from 1994 that listed 1,100 buildings along with their risks of collapsing during an earthquake event. The report was not made public.

Then in 1995 consulting engineers Delcan and Norecal provided a cost-benefit analysis of a seismic retrofit program for 1,000 buildings. The report said retrofits could save 200 lives and bring millions in economic savings and spin-off benefits that would offset a $200-million retrofit program.

Still, the Province says: “Hundreds of buildings on the list — including aging multi-storey brick apartments that provide rooms to the city’s poorest on the east side — appear to have had no seismic upgrades since 1994.”

Vancouver mayor, Gregor Robertson, responded to the Province’s reporters with a written statement that the city will work with industry and stakeholders “to explore tools and incentives to seismically upgrade all buildings in the city.”

Some older buildings in the city have been seismically retrofitted because the city requires it when they issue a building permit for renovations or changed use. However, the article points out that beyond these “passive triggers,” B.C. and Vancouver have no requirements for seismic upgrades, even though the Pacific Northwest is at high risk of a major earthquake.

In the Comments section to the article, readers question why the seismic retrofit program was neglected for buildings that serve the poor, when the city has spent millions on green programs and bike lanes.