The publication is designed to promote learning from failures by disseminating published findings from eight documented investigations. 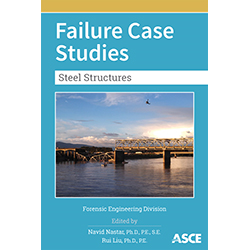 A new 52-page soft cover book has been prepared by the Education Committee of the Forensic Engineering Division of the American Society of Civil Engineers that provides case studies of failures observed in steel structures between 1970 and 2013.

The book, Failure Case Studies: Steel Structures, is designed to promote learning from failures by disseminating information regarding previous failure cases, each case study is comprised of a summary description of a documented civil engineering failure followed by lessons learned from the failure and references for further study.

The book supplies a summary of the published findings from the eight steel structure failure investigations and a collection of references that can be used by practicing engineers to improve their failure literacy.

Engineering professors and students can also use these case studies as the basis for class discussions, a starting point for further research, and a reminder that learning from past failures can avoid similar failures in the future and lead to improved engineering practices and to reduce risk to the public.