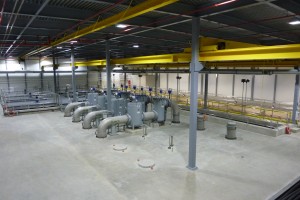 The City of Nanaimo in B.C. had the official opening of its new water treatment plant last week.

The $72.5-million plant started construction three years ago and in December began providing water to the 91,000 residents of the city located on the southeast coast of Vancouver Island. According to the city the plant has already averted several boil water orders.

The plant is only the second in Canada that uses gravity syphons to draw the water through filtration membranes. This use of gravity is estimated to save more than $60,000 a year in power costs.

There are two stages of filtration, which filter particles down to 0.1 micron (one ten-millionth of a metre, smaller than most bacteria). More than 99% of the water that passes through the sytem is recovered. The finished water has a 1 NTU maximum turbidity. There is also a disinfection stage.

Associated Engineering and MWH were the plant’s engineers. DIALOG was the architect. GE Water & Process Technologies designed the membranes and Kenaidan was the general contractor. 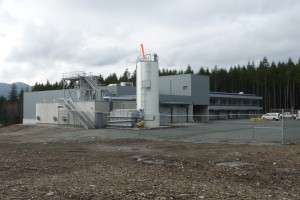