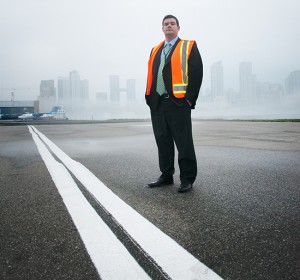 The proposed expansion of the Billy Bishop Airport in downtown Toronto is a topic of much debate. Located on the Toronto Islands, a few metres offshore at the foot of the city, the airport is already the ninth busiest in Canada and handles over two million passengers a year.

Porter Airlines, which flies out of the airport, wants to extend the main runway to allow it to operate Bombardier CS100 passenger jet planes. But opponents to the plan — downtown residents and some urban designers — say the jets will increase pollution in the lake and create untenable noise levels.

In the midst of the fray is WSP. The engineers recently made a presentation on the proposed plans at a public open house. WSP has done a number of planning, engineering and regulatory projects for the airport over the past decade. Most recently, responding to a request from the city, WSP was hired by PortsToronto to undertake a master planning exercise, which included studies of the potential jet aircraft and passenger activity. Following a competitive process, WSP was then asked to undertake the preliminary runway design. WSP is also providing technical input to the Environmental Assessment being done for PortsToronto by AECOM.

James Lindsey, WSP Aviation Director, explained how complex the project is in an interview on WSP’s website. First he outlines the actual engineering challenges:

“This project is immensely complex due to the physical environment at Billy Bishop,” he says. He explains that the proposed design will require marine land reclamation, marine breakwaters, relocating ground based instrument landing systems, analyzing runway obstructions, analyzing marine exclusion zones, and doing analysis and aircraft modelling simulations for the design of the runway and taxiway geometry.

“This work is in addition to the complexities of designing a proposed extension of single runway operations while maintaining, if approved, airport operations during construction,” says Lindsey.

There are also a myriad ownership and regulatory issues, he explains. “Other complexities include the governance of the various land owners upon which the airport is situated on the Toronto Islands. PortsToronto operates the Billy Bishop Airport under the conditions of the Tripartite Agreement, which was originally drafted and signed in 1983 by the City of Toronto, Transport Canada and PortsToronto. The Tripartite Agreement details the conditions under which Billy Bishop operates; such as the flight curfew, the noise limitations, the prohibition of jet aircraft, the prohibition against any runway extensions and the rights and responsibilities of each signatory.

“Lastly, there is the complexity of all the regulatory approvals and coordination required with Transport Canada and NAV CANADA.”

Currently passengers have to board a ferry for the short trip across the Western Gap from the mainland to the airport. However, soon they’ll be able to reach the island through a tunnel that received its certification of substantial completion at the end of May. PCL and CL Construction and Forum Equity Partners are in charge of the tunnel project, which will take passengers across on moving sidewalks at 2.3 kilometres an hour. It is due to open in July.

To read the full interview with Lindsey, click here. 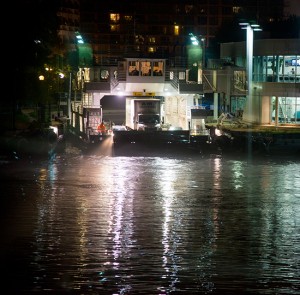