Museum of Future soars like a bird in Rio 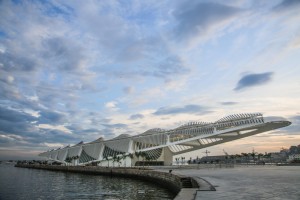 In Rio de Janeiro a new “Museum of the Future” is about to open. Designed by the Spanish architect-engineer Santiago Calatrava, the extraordinary structure stretches almost the full length of a dock on Guanabara Bay and has “wings” at each end. One stretches 45 metres, pointing to the ocean, and the other hangs 75 metres over a large new plaza.

Calatrava (designer of the soaring BCE Place in downtown Toronto and the red tube-like Peace Bridge in Calgary) says the building is meant to feel “ethereal, almost floating on the sea, like a ship, a bird or a plant.” Its low profile was also designated in order to preserve views of the bay from a nearby monastery.

Curated by physicist and cosmologist Luiz Alberto Oliveira, the exhibits will address issues that affect the future of the planet, including population growth, consumption patterns, technological advances and changes in biodiversity.

The building, located in the Puerto Maravhilha neighbourhood, has 5,000 square metres of exhibition space with the main exhibits on the upper floor.

For photos and more information and to read a full article in Designboom, click here.