McGill engineering students get chance to work with Formula One Team 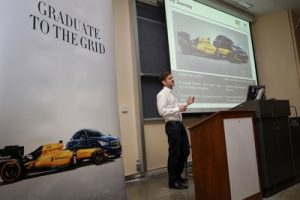 Over 100 McGill University engineering students attended an event on June 10 to learn about a competition that would give them the chance of a lifetime — to work for six months with a Formula One racing team.

The 2016 Infiniti Engineering Academy has opened up its competition to Canadian students for the first time in the program’s three years. The student selected will spend six months working with the Renault Sport Formula One Team, and another six months with an Infiniti factory F1 team.

“We are looking for candidates that dare to be different, offering a mix of academic and professional experience across a variety of technical disciplines,” said Frédéric Vasseur, racing director of the  Renault team. ”

Infiniti will choose one winner from each of the regional finals in Canada, the U.S., Mexico, China, Europe (including Russia), United Arab Emirates, Asia and Oceania (including Singapore, South Korea, Australia and Hong Kong).

Daniel Sanham, the winner from the U.K. last year spoke to the McGill students and encouraged them to enter. “I have worked on a number of incredibly complex projects that have required some serious, futuristic thinking,” he said.