Today, Hydro-Quebec commemorated the 50th anniversary of the world’s highest multiple-arch-and-buttress dam, the Daniel-Johnson Dam on the Manicouagan River, calling it an iconic symbol of modern Quebec and of hydropower. 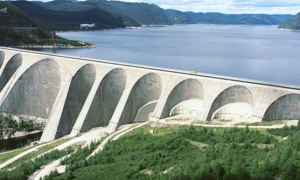 Sitting 214 km north of Baie-Comeau, the dam comprises 13 arches and 14 buttresses. It is named for Daniel Johnson Sr., who launched its construction when he was the province’s minister of water resources in 1959. He was subsequently elected premier, but passed away the night before the dam’s official inauguration on Sept. 26, 1968—an event that was then postponed by a year.

At the time, construction of the dam—which was filmed and showcased at Expo 67—represented the largest worksite in North America, with a total of 12,900 employees. It used 2.2 million cubic metres of concrete, enough to build a sidewalk between the North and South Poles. Montreal’s Olympic Stadium could fit within its main arch.

“The construction of Daniel-Johnson Dam is one of Quebec’s greatest industrial feats,” says Jonatan Julien, the province’s minister of energy and natural resources.

“The jobsite and its numerous technical achievements earned Quebec engineering recognition on the international stage,” adds Hydro-Quebec president and CEO Éric Martel. “We can be proud that, 50 years later, the dam and generating stations continue to help supply clean energy.”

To mark the 50th anniversary, Julien, Martel and Manicouagan Regional County Municipality prefect Marcel Furlong joined Hydro-Quebec employees in leaving their handprints in a concrete block that will be placed on the site as a monument to its past.