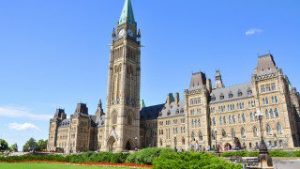 Almost a week after a giant sink appeared in one of the busiest and most prominent spots in the downtown Ottawa, crews had poured enough concrete in the hole to stabilize the site. Up to 300 concrete trucks were brought in and lined around the hole, pouring material into a hole that measures 5.5 metres deep and stretches 40 metres by 28 metres at Rideau Street and Sussex Drive. Close by is the Chateau Laurier hotel and the National War Memorial in Confederation Square.

The sinkhole swallowed a van and two construction vehicles, but no-one was reported to be hurt. Construction workers in the tunnel evacuated quickly.

Ottawa’s new LRT line is currently being tunnelled below the site, reportedly through difficult soil conditions. Engineers from Rideau Transit Group, the P3 consortium in charge of the project descended after a day or two and found that water from the hole had flooded 300 metres of the tunnel and was up to 2.5 metres deep in some parts.

The $2.1-billion Confederation Line LRT will run 12.5 kilometres east and west across the city, and includes the 2.5-kilometre tunnel downtown. The tunnelling was almost done — just 50 metres to go, when the sinkhole appeared on the morning of June 8. Rideau Transit Group includes SNC-Lavalin, EllisDon and ACS Infrastructure.

In an article in the Ottawa Citizen on June 14 Steve Cripps, a city official, told the newspaper: “In terms of what’s caused this and where responsibility lies, we haven’t got that yet and it will be a little while before we do.” He said the city had brought in a team of staff and consultants to investigate, and were concentrating on restoring services.

By June 14, most stores and businesses had reopened and the sinkhole had become the latest tourist attraction for visitors to the national capital.

The Confederation Line project was named North America’s PPP 2013 “Deal of the Year” by Project Finance Magazine of New York.

To read an article in the Ottawa Citizen, click here.

To read the City of Ottawa’s timeline, click here.