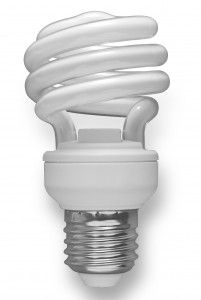 A decade ago compact fluorescent lighting (CFL) was being promoted as the energy efficient alternative to incandescent and other lighting.

Now GE has announced it will stop producing CFL light bulbs for the consumer and commercial markets this year, in both the U.S. and Canada.  Instead it will concentrate on producing LED lighting.

Compact fluorescent lighting represented as much as 30% of the light bulb market in the U.S. in the mid-1980s, but by last year CFLs made up just 15% of sales.

The CFL bulb was never satisfactory. The coiled bulbs are awkward shapes. They give off a harsh cold light, and they can take time to warm up.

Their biggest downside, however, is that they contain a small amount of mercury, and so have to be especially disposed of. As an article in CleanTechnica noted, “trying to find a CFL recycler proved to be a task which rated high on the ‘nearly impossible’ list.”

Another downside is that CFL bulbs will no longer qualify for the Energy Star rating system. Energy Star has issued new energy ratings for lighting in January.

There is no word yet on whether GE will phase out CFLs for the commercial market.