One of the most unusual buildings to be constructed in recent decades in Toronto has won the top award for outstand...

May 31, 2004
by Canadian Consulting Engineer 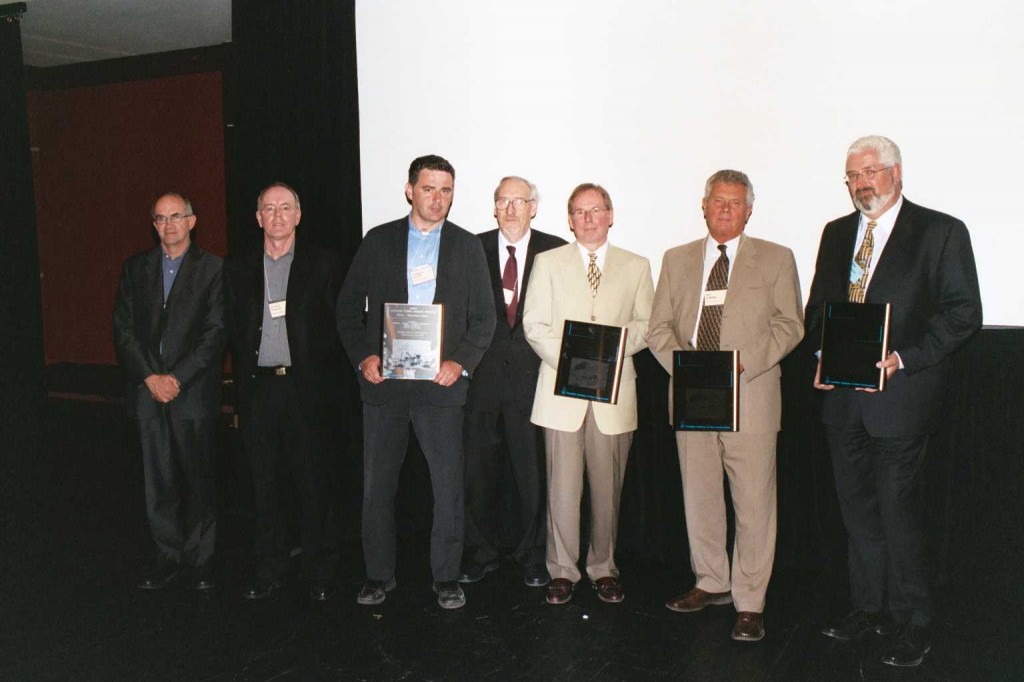 The design team for the Ontario College of Art & Design Sharp Centre for Design accept the Canadian Institute of Steel Construction Engineering Award May 17.

One of the most unusual buildings to be constructed in recent decades in Toronto has won the top award for outstanding structure in the Canadian Institute of Steel Construction Awards, Ontario Chapter.
The Ontario College of Art & Design’s new wing along McCaul Street was given the award on May 17. The wing is called a “flying rectangle,” and makes an astonishing sight as it straddles over existing buildings, standing 26 metres high on coloured stilts.
The structural engineers on the project — which is formerly named the Sharp Centre for Design — were Carruthers & Wallace of Toronto. Paul Sandford, P.Eng., Li Ming Tang, P.Eng. and Sha Zhu were the key players at the firm.
Canadian Consulting Engineer magazine featured the project and the Royal Ontario Museum expansion which is still under construction in the December 2003 article called “The New Eccentrics” (Click on Archives, www.canadianconsultingengineer.com). The architects of the Art College addition were Robbie/Young + Wright of Toronto and Alsop Architects of the U.K. General contractor was PCL Constructers, and steel detailing, fabrication and erection was by Walters Inc.
Honourable mentions in the CISC-Ontario Awards in the Engineering Category were also given to the Ricoh Coliseum renovation at Exhibition Place, Toronto. Yolles Partnership was structural engineer.
Yolles also won an honourable mention in the Architectural category for the Niagara Falls Casino & Resort, for which they were also structural engineers.
Members of the jury included Scot McCavour, P.Eng. of McCavour engineering and Bruce Neil, P.Eng. of Adjeleian Allen Rubeli.