Over 120 people from consulting engineering firms joined in a conference call organized by the Association of Canad...

May 25, 2009
by Canadian Consulting Engineer 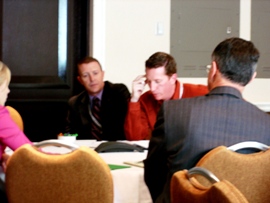 Over 120 people from consulting engineering firms joined in a conference call organized by the Association of Canadian Engineering Companies (ACEC) on Wednesday, May 20 with Canada’s Minister of Transport and Infrastructure, John Baird. The conference call was initiated in Montreal at the Queen Elizabeth Hotel, concurrent with the National Engineering Summit being held there.

The callers heard ACEC President Jeff Morrison pose a series of questions to the Minister about the government’s progress and intentions for the $12-billion infrastructure stimulus spending announced earlier this year.

Baird said the government is moving about “10 times faster than with previous infrastructure programs.” In the past there often has been a gap of years between the announcement of a project and when it starts construction, but this stimulus package “is not a long-term building program,” he said.  For that reason, he suggested that major projects like new subway lines won’t qualify under the stimulus spending package, but they will qualify under other programs such as the Build Canada Fund.

The first question Morrison asked on behalf of an ACEC member firm was related to the stipulation in the stimulus package that projects must be completed by March 31, 2011. Morrison pointed out that this date left very little time for anything other than the most basic projects. He asked Baird, (a) Will you consider extending the deadline? and, (b) What will happen to municipalities who obtain funding for projects but then don’t complete them in time? Morrison pointed out that from the point of view of engineering firms, short-term projects will only provide limited employment growth.

Baird was unequivocal in answering that there would be no leeway on either question, and that it’s up to municipalities to make sure that the projects they submit for the funding can be done within the short time frame. “If not, they are probably not a good project for this program.” He said the first priority of the stimulus program is job creation. Other federal programs such as the Building Canada program are ongoing and may be more suitable for long term infrastructure.

Baird also didn’t offer much comfort when Morrison asked him if the government would opt to use Quality Based Selection when hiring engineering firms (i.e. selection based on the firm’s qualifications and experience rather than on price). Baird indicated that the government does not want to dictate procurement methods to the project proponents. Besides, he said, there are all kinds of considerations that could be brought to bear on the decisions, such as First Nations involvement, Canadian content requirements, etc.  “I’m loathe to get into that,” he said, adding, “We’re trying not to micromanage from Ottawa.”

He indicated that while the government is in favour of public-private partnerships, they would leave those decisions to the municipalities.

One thing the government is certain it does not want to see, he said, is municipalities using the stimulus spending monies on projects they already had plans for, or on non-infrastructure projects such as maintenance, snow plowing, and balancing budgets (as has been the case with some cities in the past).

In view of this risk of the funding being diverted, Morrison asked what mechanisms the government would use to ensure the money went to building new infrastructure. Baird replied that the plan is to pay the municipalities 25% up front, and the rest on receipt of an invoice.

Baird also said that his government is enjoying an excellent relationship with the provinces on identifying projects that can be executed quickly, mentioning in particular Newfoundland, as well as B.C., Manitoba, Ontario, Nova Scotia and Quebec.

An audio file of the conference call can be heard at  http://www.acec.ca/en/docs/services/BairdConferenceCall.zip