"Infrastructure Canada’s reporting excluded almost half of the government’s investment." 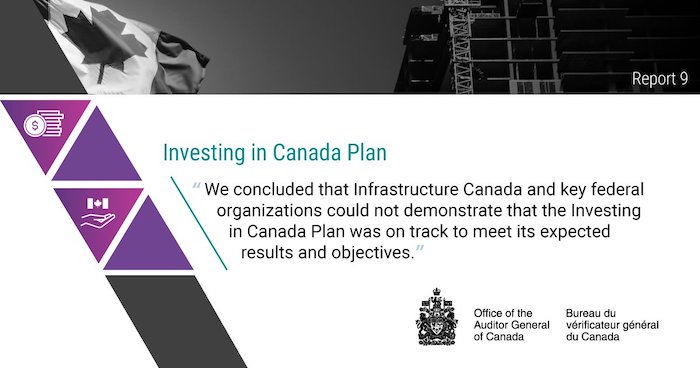 Image courtesy Office of the Auditor General of Canada.

A report from auditor general Karen Hogan, tabled yesterday in the House of Commons, indicates Infrastructure Canada has failed to provide meaningful public reporting on whether or not the Investing in Canada Plan was meeting its objectives.

Among the audit’s findings, the reporting captured only some programs each year, federal partner organizations provided inconsistent information, year-over-year reporting did not reflect comparable results or provide a complete picture of the plan’s results.

The audit also found funds were not spent as quickly as planned. Approximately 20% of planned spending was unspent in the plan’s first three years and moved to later years, while no one tracked the overall impact of this reallocation. Continuously delaying and reallocating unspent funds means Infrastructure Canada and its partner organizations risk not meeting the plan’s objectives.

“This plan is important because the government is investing $188 billion to generate long‑term economic growth, improve communities’ resiliency, support the transition to a green economy and improve social inclusion and socio‑economic outcomes for all Canadians,” Hogan said. “Infrastructure Canada’s reporting excluded almost half of the government’s investment. The absence of clear and complete reporting makes it difficult for parliamentarians and Canadians to know whether progress is being made against the intended objectives. The issues affecting the plan are not new; we have seen similar problems in many past audits in areas that require cross-departmental or cross-jurisdictional collaboration.”

“The auditor general’s review says we need to do a better job of showing our work and I agree,” said Catherine McKenna, federal minister of infrastructure and communities since 2019, in response to the report. “Five years into the plan, we have invested $81 billion in over 67,000 projects. I appreciate Canadians must be able to see the benefits of their tax dollars. Since I’ve been in this job, my goal has been to get projects approved quickly. Over the past year, I have approved 2,300, more than three times the year prior. Accelerating approvals and delivery is critical during the pandemic and for restarting our economy. We launched Canada’s first-ever national infrastructure assessment and will rely on experts, data and evidence to identify needs and priorities.”