Infographic on Games' construction, plus eye-catching examples of its architecture posted on the internet

For engineers, watching the physical prowess of the world’s greatest athletes during the Olympic Games is matched by their appreciation of the astoundingly beautiful city in the background.
The New Jersey Institute of Technology master of civil engineering department has created an infographic about “some of the greatest concerns, challenges and acomplishments that civil engineers in Rio de Janeiro have helped to tackle.” They also discuss some of the downside of the construction,and the lasting impact that the developments will have on the city’s infrastructure and economy.
An article in the infographic says that despite some criticisms about the billions of dollars being spent on infrastructure, and the displacement of people from their homes and from the shanty towns to make way for the buildings, the people will eventually benefit. They say 14 different venues were built, including the main Olympic Park which has a total area of 44 acres. The subway line was extended by 16 kilometres, and the entire transportation system was renovated so that it can now serve 66% of the population, whereas before it only served 38%. The Olympic Village for the athletes sits on a 185-acre site and has 31 condominium buildings, which will add to the housing stock. Work was also done to clean up Guanabara Bay,
To see the infographic, click here.

In its latest e-newsletter Designboom highlights “some of the most eye-catching examples of modernist Brazilian architecture.” Photographs of some amazing expressive structures from the 20th century are shown, including the 16-metre high saucer shaped Niteroi Contemporary Art Museum which sits poised on a rock off Rio de Janeiro’s Guanabara Bay. It was designed by famed architect Oscar Niemeyer in 1996. Also shown is Niemeyer’s earlier Cathedral of Brasilia from 1970, a concrete structure of 16 columns forming a hyperboloid structure with stained glass panels between, the whole thing “reaching towards the heavens.” Another is the Hotel Tambau, a ring-shaped structure beside the Atlantic Ocean in northeast Brazil, designed by Sergio Bernardes.
To see the full article and photos, click here. 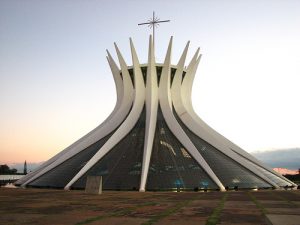