Retrofit of generating plant said to be the largest plant in the world to capture carbon dioxide after the combustion process. 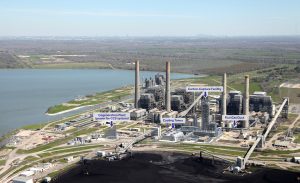 As reported in Environment & Energy Publishing via Climate Wire, the new Petra Nova carbon capture system (CCS)  is a retrofit to Unit 8 at the W.A. Parish Generating Station, a coal-fired plant in Thompsons, southwest of Houston, Texas. The CCS plant is due to go on line by the end of the year.

Previously Canada has boasted the largest project of this type: SaskPower’s Boundary Dam Integrated Carbon Capture and Storage Project in Estevan, Saskatchewan. It was designed with the help of Stantec.

NRG Energy and JX Nippon of Japan are the joint venture running the multi-billion Texas project for Petra Nova. The plant is also partly funded by the U.S. Department of Energy. It uses an amine-based scrubber developed by Mitsubishi to capture 90% of the carbon dioxide, as well as particulates, sulphur oxides and nitrogen oxides from a 240-MW slipstream of exhaust flue gas from the coal combustion process. The captured CO2 will be pumped to an oil field  80 miles away to help in enhanced oil recovery. The Project is expected to capture approximately 1.6 million tons of CO2 annually.

SaskPower’s Boundary Dam carbon capture project began operating in 2014 and was the world’s first post-combustion coal fired carbon capture and storage (CCS) project on a commercial scale. The carbon capture technology was added as a retrofit to an aging coal fired plant Unit #3 in Estevan which produces 115 MW of base load electricity. Like the Texas project it also sends the captured carbon dioxide emissions to an oil field for enhanced oil recovery.  SaskPower also operates a commercial-scale test facility at the Shand Power Station in Estevan which is used to investigate different amine-based technologies for absorbing CO2 from the coal combustion process.

A carbon capture plant of a different type is also under construction in the U.S.  Instead of capturing carbon emissions after the combustion process, the entirely new 582-MW Kemper County Energy Facility in Mississippi turns lignite coal into gas and captures the carbon dioxide before the combustion process.

To read the article in ClimateWire/Scientific American, click here.

To read about the Petra Nova carbon capture project near Houston, click here.