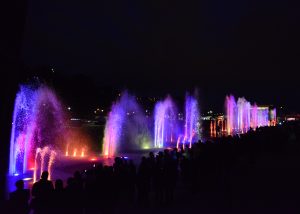 A spectacular large fountain — the most powerful of its kind in Canada — was officially inaugurated in the City of Lévis on July 6.

The Paquet Wharf fountain has 160 jets that spray water up to 9 metres high. It is located on a platform lit by LED lights, located in two architectural pools of 2,400 square metres.

The water display is a highlight of a new linear park being developed along the St. Lawrence shoreline. Levis sits on the south shore of the river, opposite Quebec City, and is redeveloping the Pacquet wharf and shoreline recreational areas.

A total of 38 pumps power the water display, and over 10 kilometres of underground pipes have been installed. The system recycles the water, filtering and treating it in a 145-cubic metre underground pool.

WSP is the consulting engineer of the fountain. Lemay+ DAA are the architects; JES and Soucy Aquatik did the construction.

Francois Beaudoin, WSP Project Director, Infrastructure,  says:  “WSP’s strong collaboration with Lemay Architecture has resulted in a captivating, world-class fountain that is among the most important interactive fountains in Canada.  WSP’s team contributed mechanical, electrical, structural and civil engineering and design of the entire fountain, including piping, pumps, mechanical room, civil works and excavation, field and pipe hydrants and water systems, steel works and the removal of contaminated soils.”

He continues, “We’re delighted with the way the project came together and are proud to be a part of this stunning new attraction for the City of Levis.”