TWICE Committee was established by ACEC-Manitoba. It "represents a call to action for individuals and organizations..." 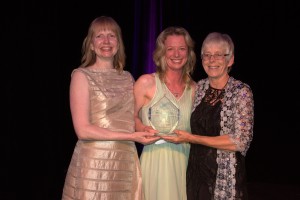 At the Chair’s Gala that culminated the ACEC-Canada Leadership Summit in Niagara Falls, ACEC gave out two special awards. One, the Chair’s Award, went to the Technical Women In Consulting Engineering (TWICE) Committee. It was formed in 2013 under the ACEC-Manitoba umbrella.

The committee aims to foster the increased representation of women in the engineering profession and the consulting sector.

Anne Poschmann, the outgoing chair of ACEC-Canada and its first female chair, handed out the award, saying: “Although some universities are now claiming to have 30% women in their engineering program, it has been a struggle to maintain even 20% women in the workplace at the early career level, or the senior level. Any profession which does not include nearly half of its population suffers in its creativity and creative potential.”

The committee’s founding chair, Kristen Poff, accepted the award on behalf of the committee, along with the president of ACEC-Manitoba, Alana Gauthier.

Poff said: “TWICE represents a call to action for individuals and organizations to actively lead change and foster an environment of diversity and inclusion.”

“Several studies show that diversified workplaces have the competitive advantage. The best ideas and innovations come from seeking out different points of view, and diverse perspectives lead to different ways of thinking, which creates new opportunities and solutions.”

This is the first time the Chair’s Award has been given to a committee as opposed to an individual.

The Allen D. Williams Scholarship award was also handed out at the gala dinner. It has been awarded to Owen Mierke of Associated Engineering, who is a project manager with the company’s northern infrastructure group. The award is presented annually to a young professional, employed by an ACEC member firm, who demonstrates a commitment to the consulting engineering industry in their province or territory. Mierke graduated from the University of Saskatchewan in civil engineering in 2006