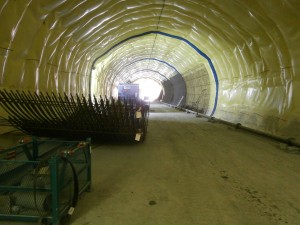 The tunnel across the Western Channel carrying travellers from downtown Toronto to the Billy Bishop Airport on the Toronto Islands was opened last week.

Arup was the lead design engineer on the award-winning structure, which lies 100 feet underground and extends 260 metres in total.

The tunnel design uses a seven-drift arch, which is a system of seven smaller tunnels filled with concrete to form an arch over the main tunnel. It’s the first time this pre-support technique was used in Canada here and involved drilling seven 1.85-m diameter interlocking drift bores above the main tunnel crown using tunnel boring machines. The drifts allowed excavation to continue under the crown while enabling the tunnel to hold its shape.

Within this innovative design, three of these drifts carry the City of Toronto’s municipal water and sewer mains to service the Toronto Island.

The tunnel project was built for Ports Toronto for $82.5 million in 36 months by a public private consortium led by Forum Equity Partners as developer and PCL Constructors as the design builder. ZAS Architects worked with Arup on the design.

It will take passengers about six minutes to pass through the tunnel on moving sidewalks that travel around 2.3 kilometres an hour. Over 1,000 people an hour can travel through it at any time, with 42 large digital screens to entertain them at various points in the tunnel and entrance pavilions. On the Island side a life-size model of a Nieuport 17 hangs from the ceiling of the atrium. The plane is the same model that Canadian war hero William “Billy” Bishop piloted.

For passengers who have the time and prefer the thrill of water travel, the ferry will continue to make the passage across to the airport. 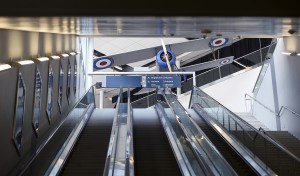