Bigger turbines brought in to capture Bay of Fundy tides 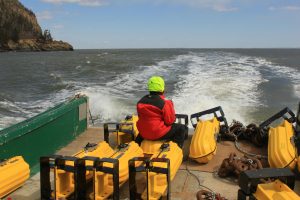 Located between Nova Scotia and New Brunswick on the Atlantic Ocean, the Bay of Fundy has some of the strongest tides in the world. Since 2009 tests and research have been carried out on the Nova Scotia side to find turbine technology that can withstand the tidal force and capture the energy for feeding into the grid.

A May 30 Canadian Press article by Kevin Bissett describes how in 2009 a 1-MW turbine was placed in the Minas Passage by OpenHydro and Nova Scotia Power. Unfortunately the power of the water proved too much and snapped off the turbine’s 12-metre blades.

Now, Bissett writes, Open Hydro with Emera and Cape Sharp Tidal are trying again with a much larger set of turbines that will be installed in June. Two new towering turbines that each weigh 1,000 tonnes and are 16 metres wide are due to be installed in the ocean passage next month.  They apparently are a “much more robust version of the 2009 design that was so badly battered.”

Another technology developer, Black Rock Tidal Power, sees the answer in a system of 40 small turbines, each about 4 metres in diameter. Other companies that are developing technologies are DP Energy and Minas Energy. It’s been estimated that the power in the tides could generate 2,500 to 7,000 MW of power — enough to power the homes of all Atlantic Canada.

Matt Lumley of the Fundy Ocean Research Centre for Energy (FORCE), an organization that runs the tidal power test site on the Nova Scotia side, says that the strength of the tides that the pilot technologies have to withstand at the Minas Passage is “like someone tightening their fingers on the end of a garden hose.”

FORCE is funded by the technology companies, by Encana and the Canadian and Nova Scotia governments. FORCE provides the different technology companies with a shared observation facility, submarine cables and grid connections for their pilot projects. Joe Fitzharris of AMEC Black & MacDonald is chair of the FORCE board.

Fishermen have been raising alarms about the potential effects of the turbines on their livelihoods.  In March FORCE, together with the Offshore Energy Research Association and the Nova Scotia Ministry of Energy, launched a $500,000 study of the environmental effects of turbines in the Minas Passage. The study is to determine potential effects on fish, lobster, marine birds, marine mammals, and acoustic effects. A FORCE press release says, “While early research in other jurisdictions suggests the effects of in-stream tidal turbines may not be significant, the Minas Passage remains a unique environment requiring further study.”

For more information on the work at FORCE, click here.

To read the Canadian Press article by Kevin Bissett published by CBC News on May 30, click here.

To read an article from 2008 about early Bay of Fundy tidal power pilots in Canadian Consulting Engineer, click here.