Diagram of ITER tokamak in its concrete home.

Amec Foster Wheeler is playing a major role in the ITER fusion energy project under construction in Cadarache in the South of France. ITER is an international collaboration to build a demonstration project for nuclear fusion power, which could become a source of limitless energy that is safe and does not emit carbon.

The plant in Cadarache, currently under construction, is intended to be the key step between today’s fusion research machines and the actual fusion power plants of the future. The ITER tokamak (a large magnetic device) will have 10 times the plasma volume of the largest machine operating today, allowing it to be the first to maintain fusion for long periods of time. ITAR is also the first fusion facility to test integrated technologies, and materials for the commercial production of electricity.

Amec Foster Wheeler has several contracts at ITER, but its latest is to lead a consortium to examine how best to decommission the plant in 2042 when it comes to the end of its service life. For the decommissioning project Amec Foster Wheeler is working with EAI and NUKEM , but the company has also won standalone contracts. One is to prepare a program of decontamination and to do the conceptual design and engineering for a remote cutting and packaging system to reduce the volume of waste at the plant. Another is to engineer a remotely operated rail and trolley system for the maintenance and inspection of the ITER’s cryostat which includes the vacuum vessel and tokamak, its key parts. As well, the European entity working on ITER (Fusion For Energy) has appointed Amec  Foster Wheeler to provide services for the nuclear safety electronic controls and instrumentation systems.

The countries collaborating on the 35-year ITER project are China, the European Union, India, Japan, Korea, Russia and the United States.  The European Union is funding almost half of the project.

The  goal is for the ITER tokamak to produce 500 MW of fusion power with a tenfold return on energy. The existing world record is held by the European tokamak, JET, which produced 16 MW of fusion power from a total input power of 24 MW in 1979.

Fusion is the energy source of the sun and stars. According to the ITER’s website, the most efficient fusion reaction in the lab is to use two hydrogen isotopes, deuterium (D) and tritium (T). The DT fusion reaction produces the highest energy gain at the “lowest” temperatures. Three conditions have to be fulfilled to achieve fusion in a lab, including  a temperature on the order of 150,000,000°C, sufficient plasma particle density (to increase the likelihood that collisions occur), and sufficient confinement time (to hold the plasma, which has a propensity to expand, within a defined volume.

AMEC Foster Wheeler is based in the U.K. and has 36,000 employees in more than 55 countries, including 5,000 in offices across Canada. 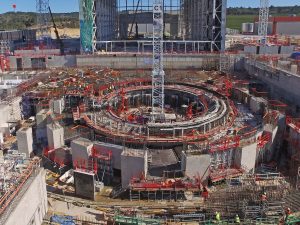 At the announcement of the decommissioning study contract, Greg Willetts, vice president for its clean energy business, said:

“These contract wins underline our leading expertise in conceptual design, engineering, technical specifications, remote handling and planning for decommissioning. They take us further towards our aspiration to play a major role in developing future nuclear technologies while continuing to support the existing nuclear fission power industry.”