Kyle V. Davy says professional firms have a desire to do well, not just make profits 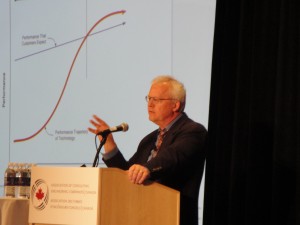 The ACEC 2015 Leadership Summit held in Niagara Falls on June 11-13 was all about the huge transformations occurring in the consulting engineering industry.

ACEC (the Association of Consulting Engineering Companies-Canada responded with a program of sessions devoted to how firms could transform themselves to keep up with this quickly changing business environment.

Setting a high note was keynote speaker Kyle V. Davy who spoke on June 12, on “State of the Practice: Exploring Models of Professional Practice.”

Davy is a U.S. architect, but since 1992 he has had a business consulting firm focused on both engineering and architecture firms. He is a principal faculty member of the American Council of Engineering Companies (ACEC-US) Senior Executive Institute and a published author of articles and books.

Davy began by saying that the underlying business model for consulting engineers is seriously out of date with the current world.

He gave a quick history of how practice models have evolved, beginning with the 19th-century era when engineers and architects were engaged not just with design and specifications but also with the “conceptualization possibilities.”

In the 20th century, Davy explained, engineers drifted away from this entrepreneurial model. Many became employees, and those that stayed in practice were risk-averse. They charged for their services based on a schedule of fees and fared well, with lots of work, until the anti-trust regulations hit in the 1970s. Then governments “pulled the plug” and said the setting of fees was to be restricted; professionals had to compete for the work. Eventually this has led to engineers becoming “time sellers,” and the commoditization of professional services that we see today. “The brutal fact is commoditization is a real problem in our industry,” said Davy.

His solution is for firms to move to a new “value proposition,” one based on the premise that “we create value and are fairly rewarded for the value we create for clients and society.”

He advocates becoming a “living company,” with a focus on purpose, value and vision. He suggested that a new practice model would encourage learning, be tolerant and empower people to be innovative. It is fiscally conservative and would “keep its house in order.” It is profitable, but does not pursue “growth for growth’s sake.”

Professionals also don’t like to be controlled, they “demand empowerment” and often operate “far from the centre of corporate management,” he said.

He spent a lot of time talking about the difference of having a professionally led design-build firm. With professionals at the helm of a project the relationship between the designer and the community is transformed, because professionals want “to do well” and are not just concerned about maximizing their profits.

He gave several examples of design firms that have adapted entrepreneurial approaches, offering new services and value to their clients.

The examples included firms that include a construction arm, such as Geo-Engineers in Seattle, which takes advantage of “big data” to offer services such as avian audits for tracking bird deaths on power companies, and has an IT group called “SmartMine” that serves resource companies.

Another company decided to design a small water treatment plant for the immediate workers at a fracking operation, but is now making similar plants for other clients as a growing business.

A firm called KLJ in the U.S. helped create a fund for developing a 380 acre parcel of land for a North Dakota community that had to move above a flood plan.

He also cited Arup as a firm that spends 3% of its gross revenue on research and development around the world.

These and other companies are “doing well by doing good,” Kyle said. They are following a transformative business model that could be summed up as” “Purpose with Profit.”

Kyle also said that firms should increase the diversity of their staff, not just on racial and gender lines, but also to include non-engineers and “weird” people who help to generate creative bursts of synergy. Collaborating with university research labs is another way to inject new ideas, he suggested.

He also advised the audience, “Make small bets,” so that in new endeavours you are not risking all your business.

Professional entrepreneurs must come up with innovative value propositions and overcome their fear of taking risks. It requires being open to possibilities, and it requires making a choice, he said.