On November 15, the federal government announced the official completion of repairs to the Quebec Dam at the Timiskaming Dam complex on the border between Quebec and Ontario. 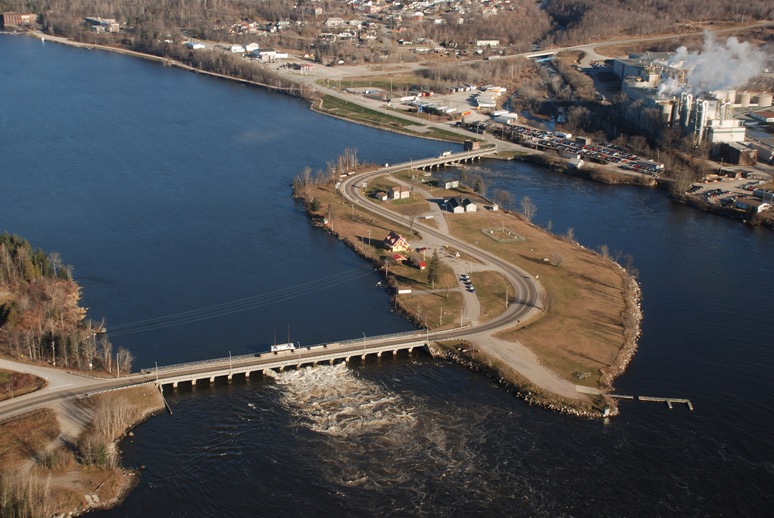 photo Aerial view of Timiskaming Dam Complex on the Ottawa River, on the border between Quebec and Ontario, 65 miles northeast of North Bay. The Ontario Dam is in the foreground and the Quebec Dam is on the far side of the island. Photo courtesy PWGSC.

On November 15, the federal government announced the official completion of repairs to the Quebec Dam at the Timiskaming Dam complex on the border between Quebec and Ontario.

The complex is located on the Ottawa River, 65 kilometres northeast of North Bay. It consists of two structurally independent dams, one in Quebec and the other in Ontario, joined by Long Sault Island in the middle. A roadway extends over the top of the dams across the Island, connecting Highway 63 in Ontario with Highway 101 in Quebec.

The dams were built in 1909-1913 by the Government of Canada in order to control the water level in Lake Timiskaming upstream and the flow of the Ottawa River downstream. They are concrete structures with sluices containing removable stoplogs.

CIMA+ SENC of Gatineau were the consulting engineers on the $800,000 Quebec Dam project which involved installing new steel supports under the existing concrete slab and adding other reinforcements.

Meanwhile Hatch of Niagara Falls is doing the engineering design for the larger and more complex work of entirely replacing the Ontario Dam which has reached the end of its useful life. Hatch was awarded a $1.9-million contract by the federal government for the work, which will involve building a new dam close to the existing one and removing the existing structure.

Design work on the Ontario dam is expected to be completed in 2014, after which tenders will be solicited for completion in late 2016. An environmental effects evaluation required by the Canadian Environmental Assessment Act 2012 was expected by this fall.