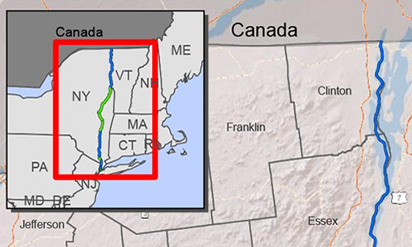 Transmission Developers has awarded an owner’s engineering mandate to SNC-Lavalin for the Champlain Hudson Power Express (CHPE) project, a high-voltage direct-current (HVDC) transmission line from Canada to the U.S.

The project entails approximately 545 km of buried cable transmission line, partly underwater and partly underground. The line will start at Quebec’s Hertel Station, cross the border under Lake Champlain, continue south and connect to converter stations in Astoria, Queens and New York, N.Y., where renewable energy from Hydro-Quebec is intended to reduce the state’s carbon footprint.

“This project will reduce greenhouse gas (GHG) emissions by 37 million metric tonnes statewide, the equivalent of taking over half a million cars off the road,” says said Ian L. Edwards, president and CEO of SNC-Lavalin.

Under the services contract, the firm will provide technical oversight and design co-ordination for an HVDC cable and converter station for the U.S. portion of the project. The firm has 50 years’ experience in the field, having delivered such HVDC applications as the Western Area Transmission Line (WATL) and Lower Churchill projects.

“This project will be executed directly by our HVDC centre of excellence in Montreal,” says Dale Clarke, the firm’s CEO of engineering services in Canada. “It solidifies our position as a world leader in HVDC electricity networks.”