Gas is currently not economically competitive with other sources of supply in North America, due to a combination of factors, including high project costs... 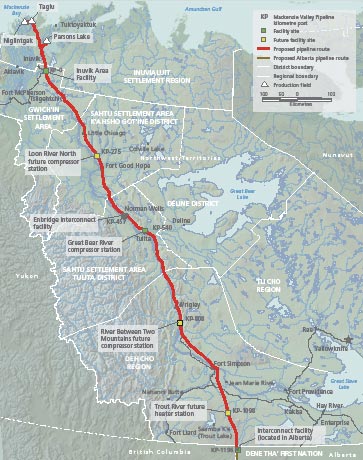 (source: NEB-Part 1: The project as a whole)

The Mackenzie gas project joint-venture participants, which includes Imperial Oil Resources Limited, ConocoPhillips Canada, ExxonMobil Canada and the Aboriginal Pipeline Group, has announced they have decided not to proceed with the project and are dissolving the joint venture.

Earlier this year the National Energy Board extended a deadline to start construction on the project until the end of 2022. Upon completion, the Mackenzie Valley pipeline would have transported gas about 1,200 km from fields in the Mackenzie Delta south along the Mackenzie River Valley through the Northwest Territories to a hub in northern Alberta.

The Mackenzie gas project was initiated in 2000, but according to a release sent out by Imperial Oil on December 22 gas is currently not economically competitive with other sources of supply in North America, due to a combination of factors, including high project costs and the continued growth of low-cost North American unconventional gas supplies.

“We recognize this is a disappointing day for the people of the North. This is a disappointment to Imperial and the other members of the joint venture, as well,” said Theresa Redburn, senior vice-president, commercial and corporate development at Imperial in the company’s release.

“This was a difficult decision. We understand that it is a disappointment to the many organizations and individuals who have advocated for the development of the natural gas resource in the Mackenzie Delta,” said Darryl Hass, vice president, Health, Safety, Environment & Sustainable Development at ConocoPhillips Canada.

“There has been a considerable investment of time and energy made by the project proponents and the people of the North,” said Redburn. “Imperial greatly appreciates the support of the communities along the pipeline right-of-way and believes the North remains an important potential source of future energy, given the right economic and regulatory conditions.”