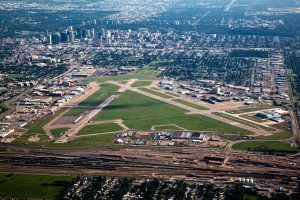 Edmonton is starting to move ahead with a development that ultimately aims to be one of the world’s first carbon neutral communities. The Blatchford community is to be built on the old city centre airport lands north of downtown. Stantec and ISL are involved in the design.

On December 12 the council approved the framework for a renewable energy system along with $19.4 million for the initial infrastructure. The system will include a district energy system of a size and scale unprecedented in North America and with three main components. First it will allow an exchange of energy between buildings, so that excess energy in one building can be used by other buildings across the neighbourhood. Second it will use geo-exchange systems. Third it will recover heat from the sewers. The system will be used for heating and cooling the buildings, and for supplying hot water. 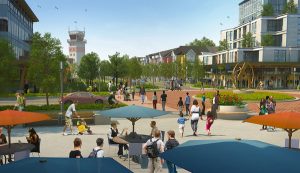 While the goal is for 100% renewable energy, the city estimates that with the systems it is implementing now at least 56 per cent of the community’s energy needs will be provided through renewable means. They are still investigating how to provide the other 44 per cent for plug loads.  Greenhouse gas emissions will be approximately 75 per cent less than in a “business as usual” community, with an estimated reduction of 42,000 tonnes/year of greenhouse gases, equivalent to burning 20 million kilograms of coal.

The 200-hectare Blatchford site will be home for 30,000 residents living in 11,000 units. The plans are for a holistically sustainable development, with mixed uses, community amenities, integrated cycle paths, etc.  Parkland that includes urban farming lots will provide links between the development parcels.

Stantec is providing design services to the city’s Blatchford Development Office for stage 1. Renderings of a detailed plan and the first 250 residences and parks — to be built on the west side of the park — were released in August. Perkins + Will designed the master plan which won a 2014 national urban design award from the Royal Architectural Institute of Canada and a 2014 GLOBE Award.

As the civil works and land-use planning consultants, ISL Engineering designed a master plan for sewer and drainage services. The goal is to have zero discharge of either sanitary and stormwater. A six-hectare stormwater wetland system will allow any stormwater to be treated and reused in irrigation, while there is also the possibility of having a wastewater treatment system that could supply grey water to the housing.

Site work has already begun on the water and sewer infrastructure and digging for the stormwater treatment pond.