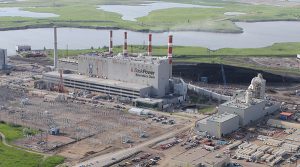 According to a CBC news report by Stefani Langenegger published December 14, costs are rising unexpectedly at SaskPower’s Boundary Dam carbon capture and storage facility in Estevan, Saskatchewan because a substance used to clean the exhaust flue is costing four or five times more than expected.

SaskPower’s president, Mike Marsh, “admits the cost of amine, an ammonia derivative used to clean particles of carbon dioxide from exhaust, is much higher than anticipated because it is degrading more quickly than expected.”

He said the company is trying to figure out what is causing the problem, but in the meantime they are having to regenerate or replace a portion of the amine more frequently.

The utility is also paying penalties to Cenovus, the oil-energy company that buys the captured carbon dioxide from the coal burning generating plant for its own oil extraction purposes. However, Marsh said that the $1.2 million in penalty payments they are paying to Cenovus because of a shortfall in delivering the CO2 are more than offset by the expected $16 million they will receive from Cenovus is revenues.

The Boundary Dam carbon capture and storage plant is an adaptation to an existing coal plant. It was  the first power station in the world to successfully use carbon capture  technology when it opened in 2014.

The plant produces 115 MW of power and can capture 80% of the carbon dioxide, and 100% of the sulphur dioxide emissions from burning coal. The carbon dioxide is either sold for enhanced oil recovery or stored over 3 kilometres underground.

Stantec were prime consultant on the plant’s adaptation and won a 2016 Canadian Consulting Engineering Award of Excellence for their work in October.  Click here.