SNC-Lavalin-Aecon did unprecedented detailed studies and full-scale mock-up in preparation. 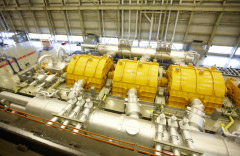 A massive refurbishment of the four nuclear reactors at the Darlington Station east of Toronto is going ahead. Ontario Power Corporation said it is ready to start on the $12.8-billion investment on a “mid-life” refurbishment of this “clean-power workhorse,” on January 11. The station is located at Clarington, about 80 kilometres east of Toronto, on the shores of Lake Ontario.

SNC-Lavalin in a 50/50 joint venture with Aecon Group has been awarded the contract to proceed with the execution phase, officially called the “Re-tube and Feeder Replacement.”

The joint venture has spent four years preparing for the refurbishment in great detail, (no doubt in an effort to avoid the very expensive overruns that have attended other nuclear plant refurbishments).

The preparations included preparing a full-scale reactor mock-up, which was used to allow the team to test specialized tools and to train workers who will use them. OPG say that the scope, schedule and cost of the project have been developed “to a level of detail not seen on prior projects,” and that “lessons learned from other major projects have been incorporated.”

OPG also said that the contracts have been structured to ensure that its partners “are accountable for price and schedule.” It has two independent oversight organizations involved, one reporting to the OPG board of directors, and one reporting directly to the Ontario Ministry of Energy.

The refurbishment will be done over the next 10 years. The work involves shutting down each reactor, removing fuel and heavy water and “islanding” the reactor from the other operating units using physical barriers. The reactor components are then replaced, which includes removing and replacing 480 fuel channel assemblies which will be processed and “placed into appropriate storage containers.” In background information OPG says, “Removing and replacing the reactor components is the critical part of the outage.”

The turbine and steam generators will also be disassembled, then rebuilt or replaced.

OPG says the refurbishment will extend the life of the 1990s-era CANDU reactors by 30 years. It will give, says OPG, “clean, reliable, base load power, at a cost lower than other alternatives considered.” It said the project is expected to cost $1.2 billion less than its original budgeted cost. Darlington’s 3,512 MWe capacity provides 20% of the province’s electricity.

OPG has also said that it intends to continue operating the nearby Pickering Nuclear Station, also east of Toronto, until 2024.

Environmentalist groups who are opposed to nuclear power say that the province should take a different approach, such as importing green hydro power from its neighbour, Quebec.