Katie McPherson, part of Vancouver's office of emergency management for five years, has been appointed the city's Chief Resilience Officer. 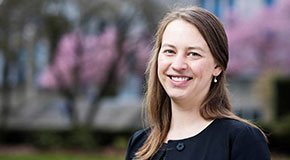 The city of Vancouver has formally launched its partnership with 100 Resilient Cities (100RC) – an initiative pioneered by The Rockefeller Foundation – and announced the appointment of its first chief resilience officer, Katie McPherson.

The appointment of a chief resilience officer (CRO) is part of the 100RC program, and is funded by the organization through a grant to the city. As CRO,McPherson will leverage resources and knowledge from 100RC, its partners, and other member cities to drive action to address the city’s most pressing resilience challenges.

McPherson will lead the development of the citywide Resilience Strategy to ensure Vancouver’s residents, communities, institutions, businesses, and systems can persist, adapt, and grow no matter what kinds of chronic stresses and acute shocks Vancouver may experience.

McPherson has been with Vancouver’s Office of Emergency Management for five years. She recently led the implementation of a new community resilience portfolio with a mandate to work collaboratively with government and community stakeholders to promote resilience to all hazards.

As manager of community resilience, and former manager of emergency planning, Katie:

“The City is proud to launch this partnership with 100RC to build a stronger resiliency strategy tailored to the issues and challenges our residents care about most, led by our first-ever chief resilience officer,” said Mayor Gregor Robertson in a release.

Vancouver was named part of the 100RC network in 2016, along with Calgary and Toronto. Montreal joined the initiative in 2014. Calgary  named its CRO, Brad Stevens, in March, while Montreal appointed Louise Bradette as CRO in Jan. 2016.