Spacecraft and math contests designed to allure the young 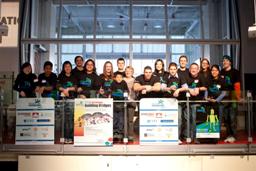 National Engineering Month kicks off March 1 across most provinces in Canada (Ontario’s began last week). The event celebrates engineering, promoting the profession as a whole, but its main goal is to persuade more children and young people to choose engineering as a career.

For the students and engineers who help out, it’s also a time for fun and social engagement.

Scores of science fairs and other events are being held in school auditoriums, on campuses, in malls, city halls and other venues.

Activities includes the traditional popsicle bridge building competitions, but also some new challenges. In Ontario, children are being invited to design robots in Sudbury, amusement park rides at the University of Toronto, spacecraft structures in Pembroke, and they are having a mathematics contest in Sault Saint Marie.

On March 1, engineering students at the University of Alberta held an event they call “Communication Breakdown.” This involves two people sitting back to back. One has a completed Lego structure and has to verbally communicate to the other person how to replicate it.

This versatile group also has something called “Candemonium” lined up for March 4, which involves creating a structure with food cans that will be donated to the campus food bank. Meanwhile, Fluor Canada is hosting Calgary’s fifth annual Canstruction event in Calgary City Hall between March 1-5.

The students at the University of Alberta area also hosting a debate on March 4 in the evening at the ETLC Design Lab on the subjects of the APEGGA (Association of Professional Engineers, Geologists and Geophysicists of Alberta)  Code of Ethics and the traditional versus co-op educational models.

Engineers Canada has a special website with information on the events, on volunteering, on the history of engineering, on featured engineering, and a special kids’ section. See www.nem-mn.ca