Along with a relocation in Montreal and name change, three longstanding associates Roberto Campos, Bruno Morin and Pascale Tétrault have been named partners in the firm.

Montreal-based Rubin & Rotman Architects will soon be moving to new premises above the Parisian Laundry Art Gallery in the city’s Saint-Henri neighbourhood, but not only will the firm that was founded in 1989 have a new address, but it will also have a new name —Figurr Architects Collective.

“We are entering a new era, which has led us to look to the future and to the sustainability of our firm,” explains Rick Rubin, partner, in a company release. Rubin co-founded the firm with architect Stephen Rotman, and along with the relocation and name change, three longstanding associates Roberto Campos, Bruno Morin and Pascale Tétrault have been named partners in the firm. 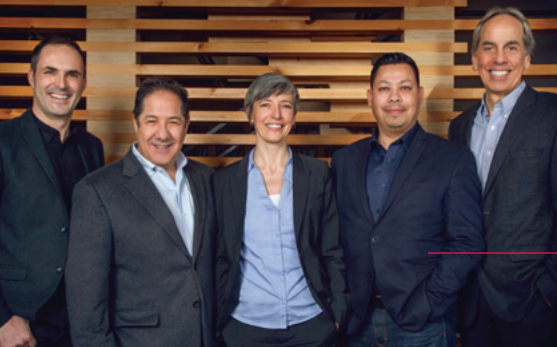 “The firm’s evolution is not driven by its founders alone but by its multidisciplinary approach, influenced by the ideas, skills, and cultures of each and every member of the team. The designation of “collective” perfectly illustrates our principal creative process and our values. We have achieved a subtle balance of Franco- and Anglo-Québécois experience, paired with the contributions of a wide range of cultures from abroad.”

According to the company, the name Figurr is an amalgam of the term “figure,” a word that expresses an important aspect of the architecture profession—the renderings that allow architects to present their plans—combined with the founders’ initials.

With offices in Montreal and Ottawa, Figurr is national in scope serving clients across the country. Campos is heading the Ottawa office, while Morin and Tétrault are both in the Montreal location.

In all the team is made up of some 40 architects, designers, and technologists, as well as administrative personnel, and it works with a local, national, and international clientele in a wide variety of sectors including corporate, residential, institutional, aviation and First Nations.