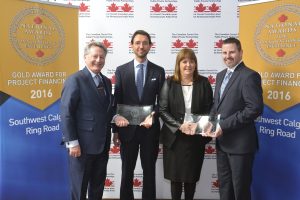 The Canadian Council for Public-Private Partnerships (CCPPP) handed out its 2016 national awards at its annual conference in Toronto on November 14. The conference is a large event attended by hundreds of executives from the construction, engineering, financial and other sectors who are involved in P3 infrastructure projects. The CCPPP Awards for Innovation and Excellence in Public-Private Partnerships awards were given out at a luncheon as part of the conference, followed by an address by Luis Alberto Moreno, President, Inter-American Development Bank.

The Gold Award for Infrastructure went to the New Oakville Trafalgar Memorial Hospital in southern Ontario (Oakville is west of Toronto along Lake Ontario). The hospital has capacity for 457 inpatient beds and additional space for 600 beds in the future. The awards panel noted how the new hospital acted as a core economic stimulant for the Oakville region and they were impressed that community input led to the success of the project.The Gold Medal Award for Financing went to the Southwest Calgary Ring Road project in Alberta. The project involved unique brownfield, greenfield and complex financing. It completes the Calgary Ring Road corridor and consists of approximately 31 kilometers of new 6 and 8 lane divided freeway. Fifteen kilometres will be located on lands acquired from the Tsuut’ina Nation.

The Silver Award for Infrastructure was given to The Meadows, Swift Current Long-Term Care Centre in Saskatchewan. The centre replaces three aging facilities in the region adding beds for long term and palliative care. The awards panel was impressed with the “human design” of the project — moving away from institutional facilities towards family design and the integration of inter-generational elements. They also applauded the high level of local contractor and community involvement.

The Silver Award for Project Development was awarded to the Women’s College Hospital Redevelopment Project in Toronto. This new facility was built around specialized operating suites and clinical “neighbourhoods” that integrate treatment, research and education, rather than having traditional in-patient wards and patient rooms. It allows for a 70 per cent increase in patient visits. The awards panel was impressed with the comprehensive community involvement in the module design.

The Silver Award for Service Delivery went to the Forensic Sciences and Coroners Complex in Toronto. The development of the complex was in direct response to a judicial inquiry into Pediatric Forensic Pathology in Ontario which identified a need for updated and consolidated facilities. The 663,000-sq.ft. “medico-legal” building houses the Office of the Chief Coroner, the Ontario Forensic Pathology Service, the Centre of Forensic Sciences and the Office of the Fire Marshal and Emergency Management. The awards panel noted that the public-private partnership model had motivated a superior level of service.

In announcing the awards, CCPPP President and CEO Mark Romoff said: “We are proud to honour this world class work and acknowledge and celebrate their success. The Council’s Awards Program highlights the exceptional leadership and innovative thinking that distinguishes the Canadian P3 model as globally best-in-class.”