Kerry Rudd retires as CEO of AE after 37 years with the firm, and Martin Jobke takes on the role of president/CEO. 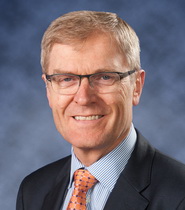 On June 30, Kerry Rudd, P.Eng., stepped down as CEO of the Associated Engineering group of companies, retiring after 37 years with the organization.

In a succession transition that was first announced in the summer of 2017, Martin Jobke, P.Eng., who took on the role of president in January 2018, has now added the CEO title.

Under Rudd’s leadership, the company grew from 450 to over 1,000 staff in 23 offices across Canada. He led acquisitions and expanded the company’s services to include environmental science, landscape architecture, ice engineering, disaster planning and recovery, urban planning, climate change adaptation and mitigation, and climate science.

Through his advocacy, the company fostered development of a Young Professionals Group and the Women in Science and Engineering Retention (WISER) Committee. He also spearheaded a carbon neutral program, and in 2009 AE became one of the first Canadian consulting engineering firms to become carbon neutral.

Although retiring from his operational role, Rudd will remain as the Chair of the Board.