Conestoga-Rovers & Associates (CRA) has been completely integrated into GHD as of July 1, meaning that the name CRA has now been absorbed. The integration, which started a year ago, creates one of the world’s leading privately-owned engineering, environmental and construction services companies, with more than 8,500 employees globally.

CRA is based in Waterloo in southwest Ontario and grew an international reputation in environmental remediation after it took a leading role in the Love Canal clean-up in New York State during the late 1970s. When the company launched in 1975 with the merger of Frank A. Rovers & Associates and Conestoga Engineering it had fewer than 10 employees. It grew to have around 3,000 staff in about 100 offices throughout North America, and undertook more than 50,000 projects.

GHD’s roots go back to 1928 when Gordon Gutteridge founded the firm in Melbourne, Australia.

The merger and name change includes all of CRA and its family of companies, including Inspec-Sol. The websites have been integrated and all e-mails and social media are being redirected through GHD.

In B.C., Lapointe Engineering of Kitimat has announced it is joining Hatch, one of Canada’s largest employee-owned professional services firms. Lapointe is a multi-disciplinary firm with about 40 employees. Hatch, based in Mississauga, Ontario, has 10,000 professionals in over 65 offices around the world. The two companies have worked side by side on projects in the Kitimat region, including supporting Rio Tinto Alcan’s Kitimat Modernization Project.

The announcement said that the integration of the two firms “opens up new opportunities for Hatch and [Lapointe] in northern British Columbia, where substantial economic expansion is expected to continue in the coming years.”

John Bianchini, chief executive officer of Hatch, said: “Lapointe has a reputation for project excellence in northwestern British Columbia, and we believe this integration will support further safe, sustainable growth in the region and an unprecedented level of service to our current and future clients.” 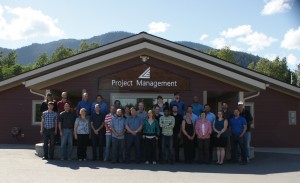 Staff of Lapointe Engineering, now part of Hatch, outside their offices in Kitimat, northern B.C.