Gage-Babcock & Associates of Vancouver, a fire protection, security and code consulting firm, has merged with Jensen Hughes of Baltimore, MD. Gage-Babcock has been in business for over 40 years and has engineers across Canada. Jensen Hughes has offices in North America, Asia and the Middle East. Together, the Jensen Hughes/GBA company will have 875 employees and combined revenues approaching $180 million.

Randall Kovacs, president of GBA, said, “This merger immediately offers additional value to our clients and directly responds to our design for greater access to resources and geographic reach.”

Peter Senez, executive vice president of Jensen Hughes’ Canadian operations, said, “We are excited to have GBA join the Jensen Hughes team. Combined with our existing Vancouver office, we are the largest specialty engineering firm in Western Canada with unmatched expertise and service offerings. 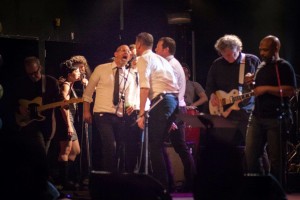 Musicians from the architecture-engineering-construction community perform at this year’s Eco Jam in Toronto, an annual event held by Smith + Andersen.

Smith + Andersen Consulting Engineers of Toronto is celebrating its 50th year in business. Founded in 1965 by Ian Smith and John Andersen, the company now has nine offices and over 400 people across Canada, specializing in mechanical and electrical services. Recent projects include the Mosaic Stadium in Regina, Humber River Hospital in Toronto, the Pacific Centre Redevelopment in Vancouver, TD Place Stadium (formerly Lansdowne Park) in Ottawa, and the ICE District towers in Edmonton.

Kevin Farbridge, principal of the firm said: “It’s always a tough question to answer when someone asks — What are you doing to celebrate? For fun, we added a 1960s theme to our “celebratory” events over the year including our Eco Jam 2015, where musicians from the industry get to perform on stage and raise money for Trees Ontario.” They also redesigned their website, which “not only helped us to realize how far we’ve come over the last 50 years but also allowed us to connect and thank all the amazing people with whom we work.”

On November 11, Tetra Tech announced its results for the fiscal year ended September 27. The California engineering company, which is traded on Nasdaq, has 41 offices in Canada, 13,000 employees worldwide, and approximately 3,000 in Canada. It reported revenue and net revenue for fiscal 2015 of $2.3 billion and $1.72 billion, respectively. The figures represented a decrease of 5% and 4% respectively compared to fiscal 2014. The statement said the year-over-year decrease in revenue was due in large part to the wind down of its remediation and construction management business. Operating income was $154 million, an increase of 12% compared to fiscal 2014, while diluted Earnings Per Share (EPS) were $1.63, up 30%. To read the press release, click here.