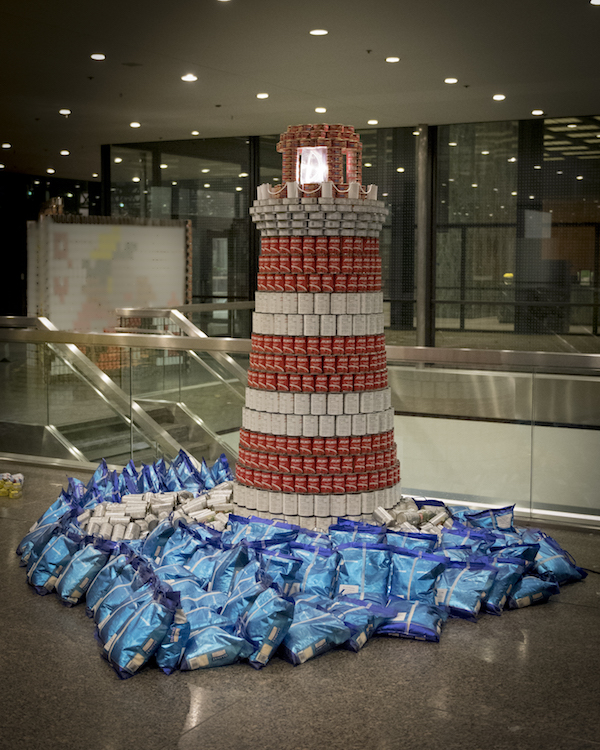 The call for entries is being sent out to teams of engineers, architects, and designers to take part in the 19th annual Canstruction Toronto event taking place again at the Toronto Dominion Centre.

Those interested are invited to attend an information night about Canstruction on Thursday, January 11, 2018 at 6:00pm at the Design Exchange (234 Bay St).

Canstruction is an international annual design and build competition to raise awareness about the growing hunger gap. Teams of architects, engineers, designers and students design and build ‘Canstructures’, structures made entirely from canned foods within a 10- x 10- x 8-foot space. Teams compete for the titles: Best Design, Best Use of Labels, Best Meal, Structural Ingenuity, and People’s Choice.

After the competition and exhibition, the structures are deconstructed and all of the cans are donated to Daily Bread Food Bank.

A jury will judge the completed ‘canstructures’ anonymously and the winners will be announced at an evening reception held at the Design Exchange.

“Canstruction is a unique charity food drive and a way for the design industry to collaborate in a creative way and give back to the community,” says Helen Kabriel, co-chair of Canstruction Toronto.

Last year, Canstruction teams in Toronto donated 56,739 lbs of shelf-stable food to Daily Bread Food Bank, which was distributed to its member agencies’ meal programs and community-based food banks, to supply 120,000 client visits. Since 1999 Canstruction Toronto has donated almost one million pounds of food to Daily Bread Food Bank. Since 1992, Canstruction has contributed more than 30 million pounds of food to programs around the world. Canstruction events are held annually in over 150 cities around the world including North America, Australia, South America, Europe and Asia.

Related Stories
Canstruction Toronto calls for 2020 entries
Engineers get creative and triumph at Toronto CanStruction
One Can can make a difference – Canstruction steering committee calls for kindness
Dates to watch for – Bob McDonald speaks at York University, CEBC calls for Entries, CANSTRUCTION coming to downtown Toronto