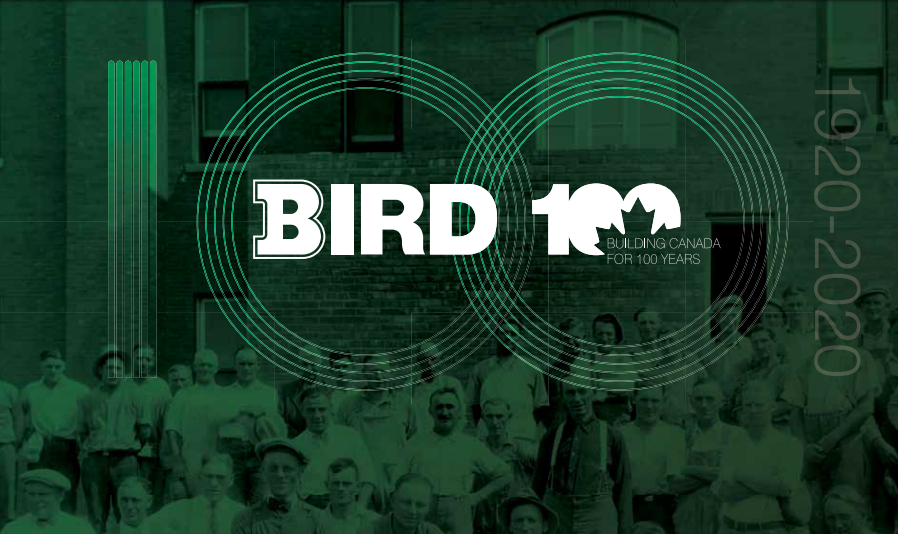 Bird Construction, a general contractor headquartered in Mississauga, Ont., and ranked among Canada’s largest builders, is marking its centenary, having commenced its first job back on Mar. 29, 1920.

Hubert John Bird founded the company in Moose Jaw, Sask., with two partners after returning from the First World War as a captain in the Canadian Engineers. In 1956, a ‘25-year club’ was established to recognize an inaugural 16 employees who had remained with the company during the Great Depression, the Second World War and other challenging early years.

Over the ensuing years, the club would grow to include 220 members (and three 50-year club members) and Bird Construction became a publicly traded builder with 11 offices coast-to-coast, handling projects in the commercial, institutional, retail, multi-tenant residential, industrial, mining, water and wastewater, energy (including nuclear and renewable) and civil sectors.

“Since our humble beginnings in 1920 to today, the company has persevered through times of war, economic downturn, natural disasters and health crises,” says president and CEO Teri McKibbon. “The key ingredients to our continued success remain our employees and their commitment to the company. Throughout our history, they have contributed immensely to our growth by operating with integrity and professionalism, creating a collaborative environment that fosters teamwork, collective stewardship and a robust safety culture.”

The company is showcasing its history in a commemorative book featuring 100 of its projects, available as a PDF file on its revamped website.