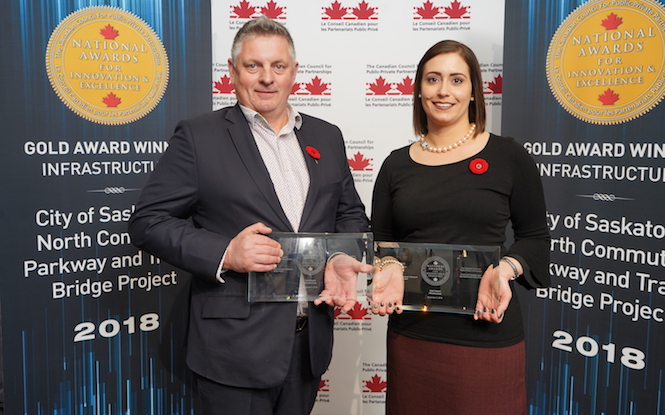 This year five projects were recognized with two receiving Gold Awards and three receiving Silver. “These projects represent the hard work and dedication of thousands of people across Canada who are making these critically important infrastructure projects a reality. Their exceptional leadership and innovative thinking are what continues to distinguish the Canadian P3 model as globally best-in-class,” said Mark Romoff, president and CEO of CCPPP. 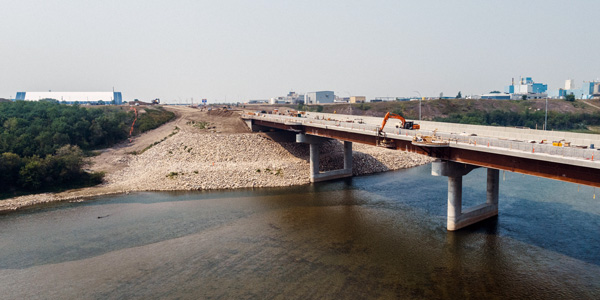 The project is the largest infrastructure project ever delivered in the City of Saskatoon and the first bundled transportation P3 in Canada.

“The city and consortium worked closely together to ensure community engagement, to manage artifact recovery and to accelerate approvals. The project bundling helped to significantly lower costs for residents and improve traffic in a bustling part of the city,” according to the awards committee.

The project’s cost savings by using the P3 delivery model are estimated at $69.4 million, compared to conventional project procurement.

The Gold Award for project financing went to the Fort McMurray West 500 kV Transmission Project. This power project, stretching 500km northeast from Edmonton, will increase the capacity and overall reliability of Alberta’s transmission system in order to meet demand in the Fort McMurray area when it becomes operational in 2019. This is also the first transmission infrastructure P3 to be procured in Canada.

The awards committee commended the project’s use of a “unique funding competition that took place after the route for the transmission line was finalized and regulatory approval had been granted, resulting in significant savings for the public.”

The competition resulted in a combination of medium- and long-term bonds priced to appeal to different investors and a dual tranche structure that created a very cost effective quarterly pay financing. At the time of award, the cost savings were estimated to be more than $400 million — approximately 25% of total capital costs.

Milton District Hospital Expansion won the Silver Infrastructure Award. Opened in October 2017, the expanded 455,000-sq.ft. facility  in Milton, Ont. means residents of all ages and abilities can stay close to home and access a wide range of health-care services.

The expansion, designed with community, staff and patient input, was delivered on time and on budget in just 25 months and took place without disrupting essential and lifesaving clinical services at the existing hospital building. The project, which employed 600 workers at its construction peak and created 200 new jobs within the hospital, transferred significant risk to the private sector partner and resulted in projected cost savings of $124.9 million.

“The high degree of collaboration among the various parties and the smooth integration of client feedback contributed to very few changes during construction and a relatively limited number of minor deficiencies at substantial completion. This challenging but very successful brownfield development involving integration with the adjacent operating hospital building demonstrates what can happen when the same firms partner on multiple projects of the same type and become leaders in the field,” said the awards committee. 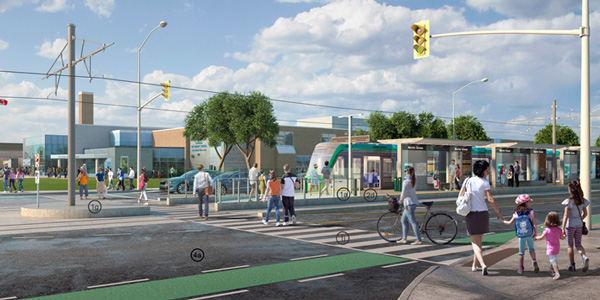 The Silver Project Financing Award went to the  Finch West LRT Project. Under construction in northwestern Toronto, the 11-km light-rail system is an Ontario government priority to transform the busy Finch Avenue West corridor. The LRT system will have 18 stops to connect commuters and families to local and regional transit services; deliver economic and job creation opportunities; and transform Finch Avenue West into a vibrant community, accessible to motorists, transit riders, cyclists and pedestrians alike. The LRT is expected to open in 2023.

The awards committee found that the project has “clear benefits to the community and economy,” noting the consortium is developing an apprenticeship plan to ensure historically disadvantaged groups are involved in constructing the line.

The $1.4-billion Finch West LRT project utilized more than $800 million in private financing consisting of short-term bank financing combined with a combination of medium- and long-term bonds.  The project reached financial close in 26 days — an Ontario P3 record, the awards committee noted. Importantly for an LRT project, the financing structure was also designed to accommodate future system expansion. Overall, the P3 project has an estimated cost savings of $566 million via the alternative financing and procurement model.

And the Silver Award for Service Delivery was presented to the Quad at York University. In August 2017, York University opened the first phase of Quad, offering apartment-style accommodations for more than 800 students in Toronto.

The project is among the largest student housing P3 projects ever undertaken in Canada and uses a model that freed York from risks associated with capital costs, operations and maintenance, enabling the university to focus its resources on its academic mission.

Under the agreement, Forum-Campus Suites operates and maintains the new housing on land leased from the university, and York ensures the needs of its students are met by providing guidance on the private sector’s operations. In addition to lease revenues, York also benefits from additional payments based on the success of the project.

Designed with the student in mind, the P3 model has created “a real partnership at York that has resulted in a purpose-built community that provides a live/work/play environment with significant student amenity space. This environment has led to quick improvements in how and where services are provided to the benefit of busy students,” the awards committee noted. “The Quad P3 could prove a useful model for similar social housing projects in municipalities and universities across Canada.”