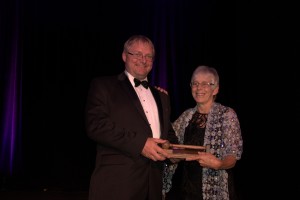 At its annual general meeting in Niagara Falls, Ontario on June 12, the Association of of Consulting Engineering Companies-Canada (ACEC) elected Perry Mitchelmore as its chair of the board of directors for 2015-2016.

Summarizing his intentions for the year ahead Mitchelmore said: “We need to continue to move forward at a steady pace, building on the success of past boards and evolving to meet the needs of our members and our industry.”

Mitchelmore is a principal of Meco, a civil engineering firm in Dartmouth, Nova Scotia. It focuses on dam engineering and dam safety, particularly as these relate to geotechnical, hydrotechnical and structural engineering. He is a Fellow of Engineers Canada, a past president of Engineers Nova Scotia and a former member of the board for the Canadian Dam Association and Consulting Engineers of Nova Scotia.

He takes over from Anne Poschmann, P.Eng., of Golder Associates, who was ACEC-Canada’s first female chair.

ACEC-Canada has 18 people from consulting engineers across Canada on its new board for 2015-2016. For a full list, see the press release and backgrounder, here.