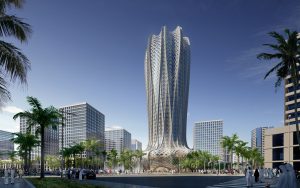 Zaha Hadid Architects has unveiled a flower-inspired design for a hotel in Qatar’s sustainable city, Lusail. The late Hadid (1950-2016) was an Iraqi-British architect known for creating extremely original dynamic and fragmented built forms. She died of a heart attack in Miami in March.

The 38-storey, 70,000-square metre hotel and residence is under construction for Al Alfia Holdings in the marina district of Lusail City. The city is being constructed about 23 kilometres north of Doha as a sustainable centre for about 450,000 residents and visitors. It will have water conservation, and energy, communications and transportation systems that respond to changing weather and traffic conditions.

The hotel’s form is inspired by the Desert Hyacinth, a flowering plant native to the coastlines of the Arabian Gulf. The building sits on a nine-pointed podium and has a form “defined by the interwoven fluid geometries of the hyacinth.” The exterior is wrapped in a filigreed mashrabiya screen to reduce solar gain. 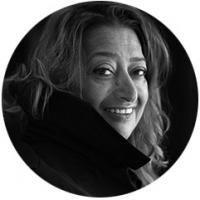 Hadid’s office is working with Arup Engineering and Atelier Ten on the project.  The architect’s website quotes Hadid saying: “We often look at nature’s systems when we work to create environments; at her unrivalled logic and coherence.”

The project summary continues: “Hadid’s work sees form and space composed into fluid spatial progressions. Transforming notions of what can be achieved in concrete, steel and glass, Zaha Hadid’s architecture combines her unwavering optimism for the future and belief in the power of invention with concepts of connectivity and fluidity.”