James Golinveaux has joined the company as president and CEO, succeeding Kevin Ortyl who served as CEO for 10 years. 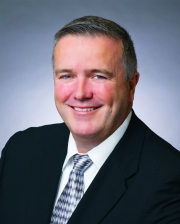 The Viking Group, manufacturer of fire protection systems, has announced James Golinveaux has joined the company as president and CEO, succeeding Kevin Ortyl who served as CEO for 10 years.

Golinveaux brings nearly 35 years of experience in the fire protection industry to Viking, including both contracting and manufacturing. He spent 25 years with Central Sprinkler/Tyco working in plant operations, technical services, R&D, product management and executive leadership.

Golinveaux was a member of the National Fire Sprinkler Association’s Board of Directors and in 2016 received the NFSA’s distinguished Russell P. Fleming Technical Service Award. He’s also served on the American Fire Sprinkler Association’s Technical Advisory Council and Manufacturers/Suppliers Council. He was also presented with the AFSA’s highest honour, the Henry S. Parmelee Award, in 2014.