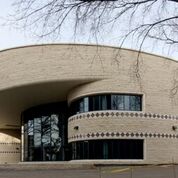 The $13.5 million building was designed by RBM Architecture and Douglas Cardinal. Structural engineers were ETS Engineering. Key West Mechanical, and Paley White and Associates, were mechanical and electrical engineers respectively. 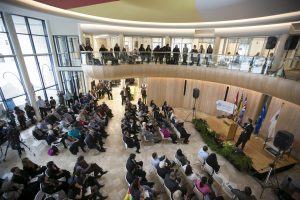 Cardinal, who is Métis and Blackfoot, is best known as the architect of the distinctive Canadian Museum of Civilization  (now renamed the Canadian Museum of History), which stands across the Ottawa River from Parliament Hill. He also designed the National Museum of the American Indian in Washington, DC.

Like Cardinal’s landmark buildings, the student centre at U of S has curved outlines that recall the organic forms of nature.  At 1,946 square metres it contains a large double-height central gathering place that can be used for ceremonial smudging and pipe ceremonies. A large exhaust fan is hidden within the high ceiling, and the fan’s exterior vents are aligned with the four cardinal directions. A feature skylight over this space recalls a star blanket, while the ceiling is decorated as a medicine wheel. The building’s upper floor has study space, a kitchenette, a computer lab and offices for Indigenous student organizations and tutors.

The building exterior is clad in Tyndall stone with two rows of inlaid tile that encircle the building and represents a wampum belt.

Designed to a LEED Gold standard, the building is expected to be approximately 70% more efficient than the equivalent designed to the Model National Energy Code for Buildings. Its energy-saving features include a large south-facing glazed wall that allows solar heat into the central gathering space during the winter. Carefully calculated overhangs help to keep out the sun out during the summer. Nearly every occupied space has access to daylight.

The building is named after Gordon Oakes Red Bear, who served as Chief of the Nekaneet First Nation for several terms and during his life helped to get Treaty Land Entitlement adopted by Saskatchewan. A believer in Aboriginal and non-Aboriginal people working together (he used the analogy of a team of horses), he was born in 1932 and died in 2002.