Third Industrial Revolution spins on energy and IT

Like any good preacher, Jeremy Rifkin held his audience spellbound at the Energy 2009 conference in Toronto by... 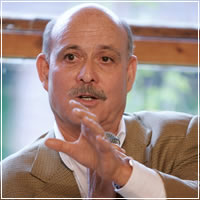 Like any good preacher, Jeremy Rifkin held his audience spellbound at the Energy 2009 conference in Toronto by promising apocalyptic disaster and the “end of civilization” unless we mend our ways.

Rifkin, the author of 17 bestselling books on the impact of technological changes, including The Hydrogen Economy, and The End of Work, spoke at the Toronto Congress Centre on November 24 about the dire effects looming if global warming continues. The solution he said all centres on the word “distributed” — distributed energy sources (renewables), married to distributed information technology (the Internet).

Rifkin was the keynote speaker on the second day of the Energy 2009 conference, which was organized by CIPEC, the Canadian Industry Program for Energy Conservation, a division of Natural Resources Canada, and the Canadian Manufacturers & Exporters.

According to Rifkin we are on the cusp of a great third industrial revolution that could take us to a “post-carbon era” by 2040. At that stage we would have weaned ourselves off petrochemical fuels with their attendant climatic dangers.

In today’s revolution, Rifkin says, the internet and global distributed communications (computers) are making it possible to have a smart power grid. It will connect not only multiple power generating sources, but also power consuming equipment. Every appliance in every house could be connected and able to adapt its consumption to the flow of power.

There are four pillars to Rifkin’s Third Industrial Revolution. The first is Renewable Energy. Every square foot of the planet is capable of producing energy, he said, whether it be biomass, wind, solar, water or geothermal. Why centralize that energy, which is according to the old model? Instead, he sees “changing the entire habitat we live in” by having multiple point sources of power feeding into a smart grid.

Within the new regime buildings would play an essential and important role. Rifkin’s second pillar is “Buildings as Positive Power Plants.” In the new world every building and facility would become a power generator, whether by solar panels or other means. Spare power generated would be fed into the grid, with the aggregate of all those small contributions amounting to a huge resource of energy production that would outshine the old centralized utilities. As an example, he cited a GM factory in Spain that has installed a $78-million photovoltaic array on its roof that is producing 10 MW of electricity and has a payback of four years.

Rifkin’s third pillar is energy storage — something that is essential given the intermittent nature of renewable power. Rifkin’s answer to this problem is hydrogen, which is “a universal carrier” of energy, and “completely convertible.” The International Space Station is running on hydrogen power, noted Rifkin, but hydrogen’s potential is only beginning to be realized.

The fourth pillar is the “smart grid” which would integrate and orchestrate the multiple generating sources with the multiple consumers for ultimate efficiency overall. In contrast, the old grid is losing 20%, Rifkin noted.

The major beneficiaries of the new energy economy should be the developing world, Rifkin said. Even now, 25% of the people in the world have never had electricity, so “we have to ripen these technologies,” and establish “massive public private partnerships with countries below the Equator.”  We need an economic development model, not a new energy or environmental plan, he said.

And even with the best technology we still need something else: good intentions  Rifkin finished his talk with a loud call for a “change of global consciousness.”  It is not just a matter of economics; we “have to change human consciousness in one generation.” We can no longer rely on individual self-interest if we are going to preserve the planet. We have to realize that all human beings are connected and develop empathy. “The key is how do we get to global empathetic consciousness in time to live sustainably and to help the Third World.”

Later panel sessions at the conference that day dealt more with the practicalities of the emerging energy economy. One session was on “Making the Most of Global Carbon Markets,” and another was on developing eco-industrial parks where different industrial plants can feed off the byproducts of each other.

3 Comments » for Third Industrial Revolution spins on energy and IT